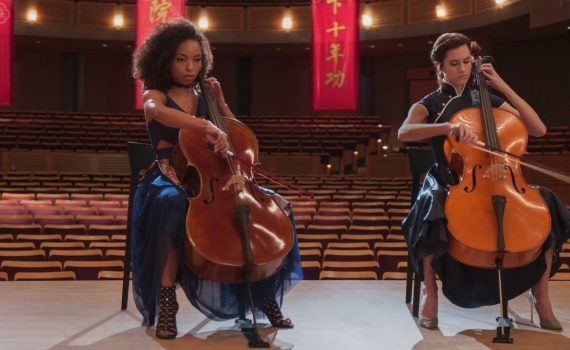 The Perfection is like if Get Out was crap.  The same lead actress, the same creepy white guy character, the envy of gifts, the imminent and bizarre blood; cou*copy*gh.  Richard Shepard, whose only “claim to fame” is Dom Hemingway, is more a TV and made-for-TV director, not a feature guy who can produce original content, so he simply stole a near-masterpiece of modern horror and added in a cello to make unsuspecting audiences think they were watching something completely new.  News flash, Richie; we’re not that dumb.  I don’t have much faith in humanity, but I’m sure there will be enough people who recognize what you did that I won’t feel completely alone.  But I’ve also seen gushing reviews come out, which only proves to me that some audiences/critics will love anything that’s remotely sensationalized, regardless of the messy rest.

A stunning cello virtuoso, Charlotte had to quit the instrument and leave a prestigious school when her mother became ill, putting her own dreams on hold.  Another girl, Elizabeth, took her top place, and would become a world-renowned player, while Charlotte watched from the sidelines.  Now that her mother has died, she is free to return to the world she once loved, though not as the young student rising to super-stardom; that path is now blocked.  But Elizabeth, Lizzie, seems lovely, and the pair of young ladies instantly connect upon meeting each other in Shanghai.  But it’s not all coming up daisies, there’s something more sinister in the air, starting with a strange sickness Lizzie contracts, and involving a small tattoo that both women share, connecting their mysterious pasts as well as their violent futures.

Lesbians are en vogue right now, and I can’t imagine how insulting that must be, while activists clamor for equal representation, to have your sexuality used as a tool to attract audiences.  It’s obvious when a story is done to reflect gay couples in real life and when it’s done to grab attention to a low-quality product, and I strongly feel that The Perfection is the latter.  This film isn’t edgy, isn’t groundbreaking, isn’t representational, it’s a gimmick, and that’s not cool.  It’s a recycling of a plot we recently watched, with the same actress we watched, from a slightly different point of view, with some of the same themes, about music instead of photography, with rape as a story arc done in bad taste; and we’re expected to applaud?  Bad on Netflix for picking up this project, and not simply for social reasons, maybe I’m just being too sensitive, but also because, well, it just sucks.  Allison Williams is talented, but literally no one else in the cast was, and the gore was stupid at best, insulting if you look into it too closely.  The plot was dumb, I hated the direction, the acting was no good, and I felt like I needed a shower after watching, which I’m guessing might have been part of the intention, a purposeful ick factor, but for that the filmmakers have only earned a “screw you”.