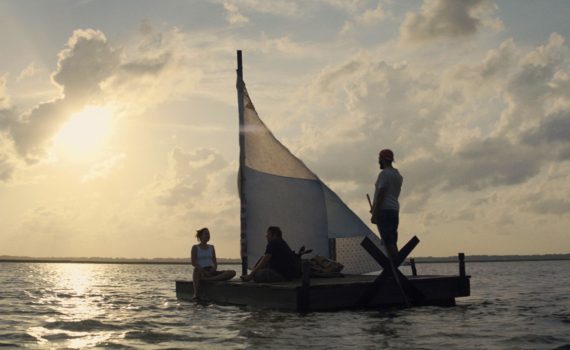 I was prepared to enjoy Peanut Butter Falcon mostly no matter what; I love Shia, I think Dakota is a better actress than she’s recognized as, I was excited about the boys-on-the-run storyline, and Zack was immediately engaging even in the trailer, I was immediately rooting for him.  And I did end up giving PBF a solid rating, there are many thing to applaud here, I can’t claim to be above the simple heart string pulls and pleasant plot swings.  But it doesn’t matter how good I want something to be or how much I’ve decided to appreciate it anyway, sometimes a movie is just kinda bad, and there’s no avoiding that truth.  This film, for all its intentions, is amateur, nonsensical, silly, and yet undeniably sweet, which is definitely its saving grace, if not exactly a reason to watch.

Zak is a young man with Down’s Syndrome who lives at a nursing home and doesn’t feel like he belongs there.  The state is his guardian, he is well taken care of by Eleanor, a staff member, he has friends, but he’s grown beyond that cage, and he wants to experience the world on his own.  Specifically, he wants to go to wrestling school, where his favorite character, Salt Water Redneck, holds training sessions.  So he escapes, without much of a plan and without clothes on, but free at last.  He soon runs into a guy with his own set of problems named Tyler, who is broke, on the run, and directionless.  The two boys quickly become friends and set out for wrestling school together, avoiding bad guys who want to get payback from Tyler and Eleanor, who just wants Zak to be safe.  But is he better off in a place that protects him or among those who will let him see the world, as dangerous as that might be?

Peanut Butter Falcon is very sweet, very nice, my mother-in-law would say, “oh that was cute”, but that’s also her roundabout way of shaking her head slightly in response to a film that doesn’t have much more to offer past its pleasantries.  That’s exactly what we have here; a movie that’s well-intentioned but completely rookie, with all the bumps in the road that amateur filmmakers usually can’t avoid.  Zack was great, Shia is special, but Dakota was completely miscast, and the cameos were pointless too: Bruce Dern, John Hawkes, Thomas Haden Church.  The story was way too uncomplicated, things worked out way too easily, it always felt like it was stolen from a thousand other plots that came before, and I don’t think there was a believable or original bone in this whole body of work.  I wanted to like PBF so I will, and I’m sure I did in some ways, but still; I can’t recommend in good conscience that you watch, because what I professional know about this movie and what I wanted to enjoy about it are two very dissimilar things.