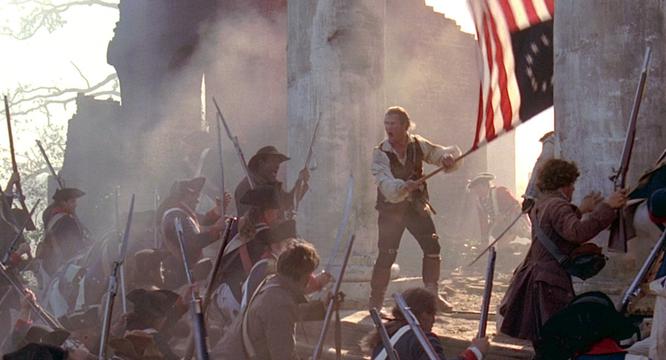 The Patriot is basically Braveheart and Last of the Mohicans combined, directed by the guy who brought us Independence Day.  That’s not so bad I guess, but it is all the description of the film you need; there is nothing coming along to surprise you into veering out of this lane that’s been meticulously plowed straight ahead through all mountains in its path.  Emmerich has the finesse of a 300 lb running back on the one yard line; it’s coming straight at you and it’s gonna knock you back a step, might as well step aside and enjoy the show.  Stargate, Independence Day, Godzilla, The Patriot, The Day After Tomorrow, 10,000 BC, 2012, Resurgence; these are simple movies, but also easy to enjoy, so the joke’s on us if we don’t allow ourselves to be entertained.  Patriot is no different, a not-so-subtle American huzzah that’s meant for families to watch together on a Friday night and not pick apart too cleanly.

As war mounts in the colonies, one South Carolina farmer must decide between what’s right and what’s safe, between doing his duty and doing the one thing he swore he’d never give himself into doing ever again.  Benjamin Martin is a good man, a war hero, but he wants a life of peace for his family, especially since his wife died and left him with seven children.  He also might not have a say in the matter, as war appears on his doorstep, claims the life of one son, and threatens another.  These events put him and his eldest Gabriel right in the thick of things, as battles rage across the newly-formed United States and the British fight to hold on their wealthy, rebelling commodity.

There’s a lot going on in this movie, which is why it’s long: the American Revolution, major battles, small ambushes, the militia, the life of a solider, families back at home, love in a time of war, the past resurfacing, fathers and sons, bitter enemies, personal demons, foreign powers, sacrifice, spirituality, power, pride.  Man, that’s a lot of plot, and it’s jammed in with good John Williams music, a nice Gibson performance, bitter-sweet Ledger memories, and a solid cast in general: Isaacs as the bad guy, Joely Richardson as the love interest, Chris Cooper, Tom Wilkinson, Tcheky Karyo, Lisa Brenner, Donal Logue, Leon Rippy, Adam Baldwin, Logan Lerman.  There are a lot of positives and some moments that will give you chills, which mostly make up for the parts that are super cheesy, in slo-mo, or just plain ridiculous.  It’s a little over done perhaps, but this was a dramatic time, and I guess I don’t generally have a problem with upping the volume to get across a point (and to make an easy buck).  The Patriot is just good enough for make us forgive its faults, and just heartfelt enough to get us securely on board and hold us there over the various bumps.