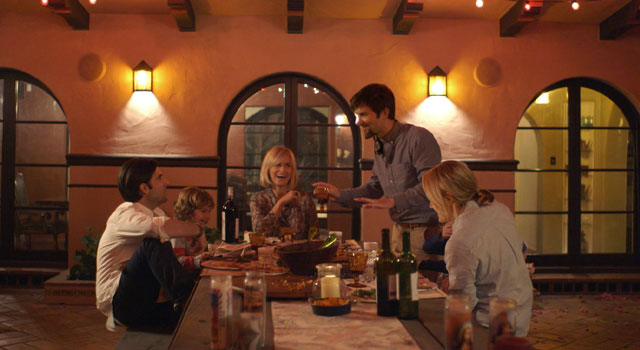 There are almost too many big names to deal with here.  And by big names, I don’t mean Hollywood superstars, but solid actors/filmmakers that you should be aware of in case you aren’t.  First off, Patrick Brice isn’t a name director, but he has worked before with Mark Duplass, who actually produced this film and should be seen as one of the creative minds behind it.  His brand of indie film is very unique; strange & funny & offbeat & identifiable.  Your Sister’s Sister, Safety Not Guaranteed, The Skeleton Twins, The One I Love; that’s the type of movie you should expect from anything with the Duplass name attached to it.  Adam Scott has indie cred as well, though he might be best known for Parks and Rec.  I loved him in The Vicious Kind, but don’t watch that if you enjoy imagining him solely as a comedian.  Taylor Schilling hasn’t done much beyond Orange Is the New Black, though that should change.  And then there’s Jason Schwartzman, who is basically a cinematic genius and has been in too many movies to name, though my favs are, of course, his Wes Anderson roles.  Anyway, all of that would help you prepare for The Overnight, if it were a movie like any other.  But it’s not, and no one could possibly have been prepared for the things I just saw.

Alex & Emily have just moved to Los Angeles and they’re not sure how to go about making new friends.  They have a young son, they’re a nice couple, and they just want to fit in somewhere.  Lucky for them, a guy from the neighborhood just walks up to them at a park and invites them over for pizza, no problem.  His name is Kurt, his wife’s name is Charlotte, they have a little boy too, and there’s absolutely no reason that the families shouldn’t become fast friends.  So they all get together at Kurt’s amazing house, hear all about his French wife’s interesting life, eat some food, drink some wine, and Alex & Emily end up having something they never thought that they would; a great time.  Too bad it has to end when the kids get tired …or does it?  Kurt uses some sort of musical magic to put the boys to bed and the adults go downstairs to continue the party.  What happens over the next few hours can’t be explained, is too crazy to make sense, and will most likely be far too taboo for a nice couple who just moved to the big city …or will it?

Imagine your typical romantic comedy.  With a plot like this, there would be misunderstandings, someone would poop somewhere they’re not supposed to, wine would be spilled, someone would walk in on someone else changing, there’d be an SUV accident with a sassy policeman on the scene, lessons would be learned by the end; you know the drill.  Well this isn’t that movie.  So imagine an indie version of that story.  Quirky humor, odd conversations, sideways glances, uncomfortable discussions; that’s actually how the film begins, and you think what you’re about to see is an indie comedy.  But there’s nothing I can do to prepare you for what this film actually is without giving it all away, so I’ll try to keep it brief.  This movie is like a romantic comedy that actually doesn’t care to stay PG-13, an indie flick that has lost control, a late-night soft-core porn that has good actors.  It’s one of the strangest and most audacious films I have ever seen.  And although there’s almost no one I would recommend it to, I actually had a really good time watching it.  I laughed, I gasped, I blushed, and I saw things that I can’t unsee; it might not have been something I was prepared for, but wow was it surprising, and that’s worth …something.