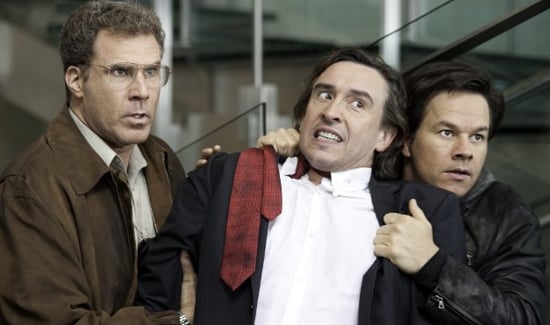 You can buy the DVD of The Other Guys for under four bucks, regularly priced at seven, and, I know it’s been out 10 years, but that price is saying something.  It’s shouting loudly and clearly that this movie is simply not good, and that is awfully accurate.  Adam McKay, bless him, but he’s done things he ought to have to repent for when the end days come, including this film, which might be his very worst yet.  The dude digs Will Ferrell, which is fine, I do too, but sometimes the humor just doesn’t work, sometimes you have to check yourself before you wreck yourself, and that includes not making this terrible movie, one that shouldn’t have made it past a regrettable brain storm session.

New York’s finest detectives are a duo named Danson & Highsmith; unfortunately those aren’t the guys this movie is about.  No, those guys actually take down criminals, are actually cool, and know what the hell it is they’re doing, although they might like to blow stuff up a little too much.  Our wannabe heroes are Hoitz & Gamble, a pair of desk jockeys who never get the big assignment, because everyone knows they’ll screw it up.  Well they’re about to stumble into something deep, a crime that climbs to the very top, and their ineptness might be the key to staying under the radar long enough to make the bust of the century.

It’s hard to summarize this movie because the plot is so stupid; two crappy cops accidentally crack the case and become friends.  Oh yeah, and a lot of very stupid stuff happens along the way, things you don’t want to remember because they’re mostly embarrassing.  That real stars were a part of this idiotic film is kinda shocking; even McKay & Ferrell don’t usually stoop this low.  Their comedy can be fun, McKay can make real cinema as well, but The Other Guys is just a bad joke from start to finish, with a supporting cast/cameo list that’s just one big name drop, not an asset in any way: Wahlberg, Ferrell, Derek Jeter, Eva Mendes, Michael Keaton, Ray Stevenson, Samuel L. Jackson, The Rock, Rob Riggle, Damon Wayans, Steve Coogan, Bobby Cannavale, Zoe Lister-Jones, Zach Woods.  It’s a stupid mess rather than an entertaining bumble, a movie not worth remembering for the few laughs it accidentally elicits.