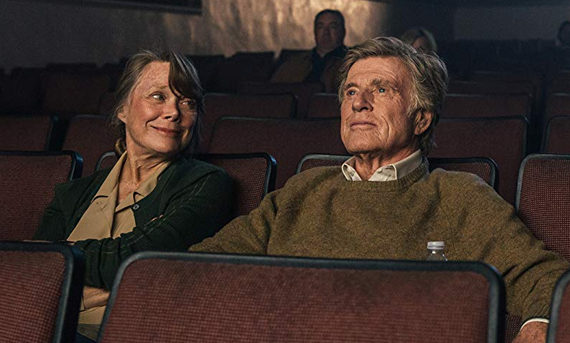 David Lowery loves working with Casey Affleck (Ain’t Them Bodies Saints, A Ghost Story), and that’s fine with me; I think he’s one of the best actors working, outpacing his more-famous brother by miles (Manchester by the Sea).  Casey is an incredible dramatic actor, he’s a natural emotive force, and while he doesn’t sit well with all audiences, due to the intensity of his methods, I’ve always appreciated that he gives his entire soul to his performances, holding nothing back from those who are willing to receive the brunt of the impact.  But The Old Man & the Gun isn’t about Affleck, who has a smaller part but still works wonders, and should always be appreciated wherever he chooses to pop up.  No, this film is about Robert Redford, who is saying goodbye to his fans with one more ride down a familiar road, and all we can do is say thank you.

This is the true story of Forrest Tucker, a life-long criminal who we can’t help but root for.  In prison off and on since he was a teen, Forrest has never been able to conform to the rules or take his punishment laying down, he’s always needed to live on his own terms, even if that means a lifetime of running.  In his older days, he’s taken to robbing banks wearing a hat and fake mustache, politely telling the managers and tellers that they are being robbed, before walking out of the room with a smile of his face.  His latest exploits have captured the attention of the nation, as he moves from town to town taking what he wants, and making friends along the way.  But crime is crime, and officer John Hunt is determined to stop Tucker, even if he is an old man at the end of his days, a washed up crook who just can’t seem to stop stealing time before the clock runs out.

The Old Man & the Gun was meant as Robert Redford’s swan song, and even if he’s walked back the idea of retirement since the movie was released, it sure feels like the end of an era and a good time to say goodbye.  After all, the man is 82, a legend, has done all he can do, and can’t have too much time left, so we might as well pay respects before he’s gone; it’s a little silly to do it after.  And Redford does the situation justice with a classic role that’s right out of his canon, with a character that is mostly himself and the rest wonderful nostalgia.  The film is nice, it’s an easy watch, you root for the “bad guy”, and you have a good time; I expected and wanted nothing more.  Redford is great, Spacek fills a role pleasantly, Affleck is as strong as always, and I liked the sidekick duo of Danny Glover & Tom Waits, that worked really well.  A period piece, a cool adventure, a chance for a few last laughs; we tip our hats to a cinematic hero.