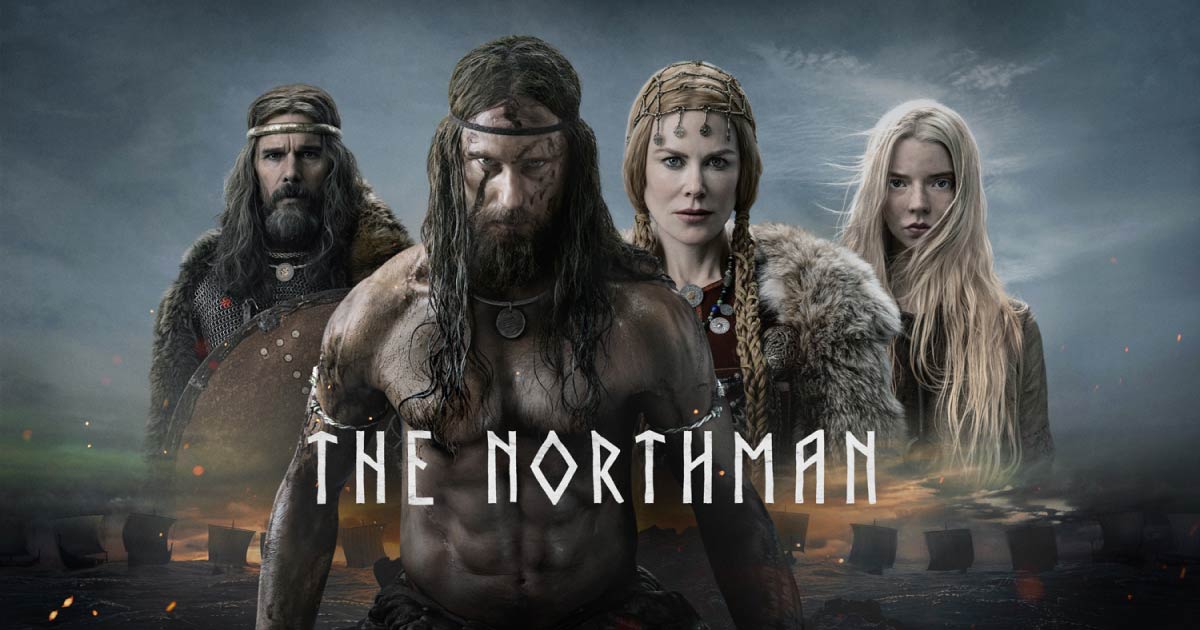 The Witch, The Lighthouse, The Northman; Robert Eggers’ three directorial features, and smash successes all.  I also think they got progressively better, which makes sense, working up to a fever pitch and exploding with chaos in his latest, bloodiest bad-assery The Northman.  It’s a classic revenge tale set in a brutal time, like Valhalla Rising for a modern decade, or The Last Kingdom shrunk down and with global politics removed.  Basically, it’s a fucking fantastic film that Eggers poured all his wicked dreams into, and we’re lucky he did.

When he was a child, the Viking prince Amleth dreamed of manhood beneath the loving hand of his father, King Aurvandil, who would guide him to greatness.  When Aurvandil’s brother Fjolnir murdered him, stole Queen Gudrun, and claimed the northern kingdom, Amleth fled for his life, becoming a great warrior among another tribe, but always haunted by his past.  Learning of Fjolnir’s new location in Iceland, Amleth’s sense of vengeance is rekindled, and the fates give him a way to honor his father, rescue his mother, and kill the fratricidal maniac who ruined his life.

Eggers started out great with Witch, got even weirder with Lighthouse, and wraps oddity in history with Northman, giving us his best film yet.  It’s a nice balance of fever dream, magic purpose, and stark reality, like Macbeth meets Green Knight, but with more bludgeoning.  It’s a bloodbath, that’s for sure, but there’s a point to it, and every death is fascinating in its honesty.  Every mystical element threatens to disrupt the almost-biographical feel, but Eggers gets the mix just right, with just enough nonsense to compliment the dirty, violent daily existence.  Skarsgard is phenomenal as the lead, carrying the entire thing on his shoulders, with us along for the ride.  Taylor-Joy was a bit of a distraction, I thought, as were Nicole Kidman and Ethan Hawke; I would have preferred lesser-known parents, or perhaps authentic Swedes (I know Mads is Danish, but he would have been perfect here as the father, and could have recurred as a dream or something, though I understand he’s in, like, every movie, but I find that a good thing).  Northman is sweeping, brutal, sexy, bizarre; it’s the whole package, and it’s the best film of the year so far.