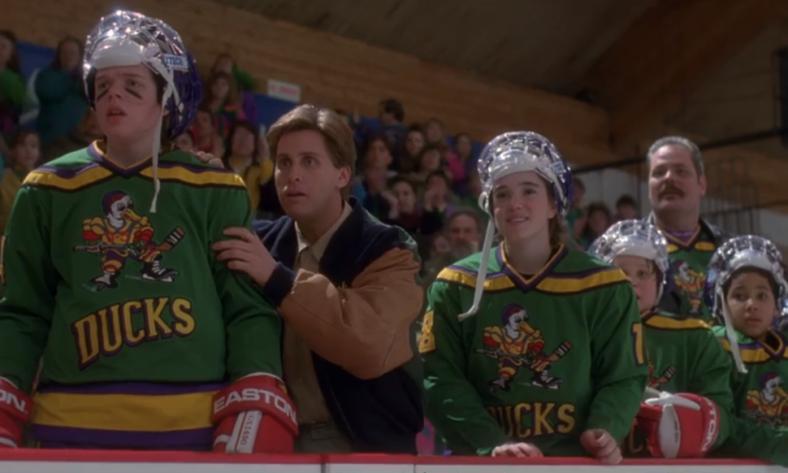 Herek gave us some icons in the late 80s & early 90s, even if none of them were really that good.  Critters, Bill & Ted, Don’t Tell Mom the Babysitter’s Dead, The Mighty Ducks, The Three Musketeers, Mr. Holland’s Opus; solid gold time capsule material but, really, aren’t we just using nostalgia to gloss over quality?  Rewatching Mighty Ducks was fun but also affirming, because this era and this genre wasn’t as great as it was when we were the perfect age to love it, which calls it all into perspective.  But it doesn’t make it worthless, I’m not saying that; my kids had a super time watching this ragtag hockey team play their hearts out, and that’s, in the end, all that matters (the fact that Emilio Estevez should never have been allowed in front of a camera not withstanding).

Gordon Bombay is a former peewee league hockey superstar in the state of Minnesota; he could have gone all the way were it not for one fateful missed shot.  But now he’s a lawyer, and if you asked him he’d say he hates hockey; he equates it with the year his father died and the tournament his team didn’t win.  Gordon wins his cases though, through whatever means necessary, he sees losing as a weakness, until his high stress job catches up with him when he’s ordered to do community service and to take a sabbatical from work.  His penance; coach a local kids hockey team, and not just any team, but the worst one in the entire city.  With a little love, and a little corporate sponsorship, this motley crew could be something special, if only their coach could confront his past, learn from his mistakes, and take them to the very top.

Mighty Ducks is a combination sports movie and kids flick, like Rudy meets Blank Check, and that’s fine for what it’s worth, and we can still love it for the memories it gave us when we were young.  Cake-eater, the Flying V, Banks and Goldberg and Charlie, Gordon Bombay, the quack attack; these things will live on in cinematic infamy forever, and that’s the way it should be, because they were at the same time very silly and somehow quite awesome.  The cast was crappy, the direction was bad, the plot was thin, but none of that seemed to matter, and it didn’t bother my kids much either; they had a blast rooting for a team while also watching a movie, which is a unique experience if you really think about it.  I can’t recommend too many adults revisiting this childhood fav, because I think the chance of a letdown is great, but I also think that there are pieces to be enjoyed as long as you have a captive audience that you’re willing to live through, and enough memories of your own long-ago captivation to get you to the end.