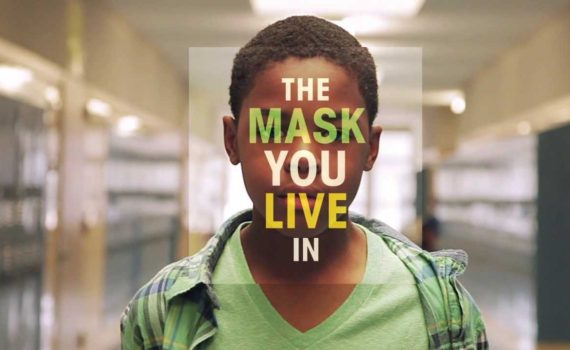 As feminist movements like Me Too and Time’s Up started pushing back against toxic masculinity and the dangerous patriarchy of America, we realized something that should have been obvious all along; men are in the midst of a serious breakdown.  That’s not to excuse the actions of those who wish to harm and dominate over women and anyone they think they can bully into submission, but it is an important aspect to consider, the idea that men are screwed up by the time they are old enough to have an impact on other people.  The reasons are varied and many; exposing them and getting to the root cause is exactly what this documentary aims to do.  The Mask You Live In is a journey down the dark path of raising emotionless boys to be violent men, and it’s a road we have to detour if anything is ever going to change.

Over the course of an hour and a half, multiple experts, mothers, and fathers will attempt to shed light on a current epidemic, one that has been brewing since mankind first formed societies.  Young men are being taught that emotions are feminine in nature, that only sissies, homos, and losers feel emotion, cry, hug, and express themselves.  This lie has turned generations of boys into confused, angry, aggressive versions of their original selves, leading to explosive violence, often against women.  Backed by research and statistics, this documentary aims to show how our treatment of our sons has created an unhealthy environment in which suicide and mass murder thrive, but also that there are simple ways to escape the fate we’ve created for ourselves, starting within our own families.

This is an extremely powerful documentary, with fact after fact that will shock you into finally taking notice of a problem that has been hiding in plain sight basically forever.  We teach our sons not to feel, not to cry, to toughen up, to solve problems physically, and later in life, when faced with the pressures of growing up, they have no one to turn to and no way to release what’s being bottled up inside.  And so emotion erupts unproductively and unhealthily, which has led us into a culture of school shootings, rape, and general misogyny, one that we can’t seem to escape.  But the prognosis isn’t dire, there are ways we can change the future, and it begins at home with what we teach our sons about their feelings.  They don’t have to live behind masks, we can allow their true selves to come out into the foreground, and, what’s more, we have a responsibility as parents to teach our boys how to deal with their problems, so that those same problems don’t become the issues that tear us all apart.