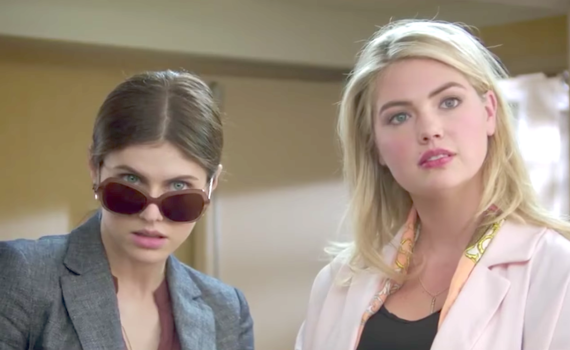 The Layover may start out as a surprising good time like The Sweetest Thing, a girls-trip romp that somehow becomes a cult classic, but quickly becomes The Other Woman, a throw-away film about cheating & bonding that’s just plain crappy.  You could tell what they were going for here, that’s something in their favor I guess, but they missed the mark by about a hundred miles, handing us a rom/com wannabe rather than a genre film that at least checks the boxes.  This movie may have two of the hottest women on the planet in it, and that may or may not be why I watched it, but it’s a far cry from quality entertainment; even if it teases with possibility, it definitely doesn’t deliver.

Meg and Kate are best friends, but they couldn’t be more different and they aren’t doing very well at the moment.  Meg runs a cosmetics business but it’s failing, and she hooks up with a ton of guys but it’s never anything serious.  Kate is a teacher but might get fired, and she’s so anxious that she never does anything fun.  With their lives crumbling, the pair decide that what they need is a vacation, so off they fly to Florida.  Unfortunately, there’s a hurricane and they’re forced to land in St. Louis, but luckily they meet a gorgeous guy named Ryan who’s being forced to layover as well.  Ready, set, start the race for the hottie, as both women go after the same man and friendship is temporarily set aside.  Apparently so is decently, sanity, and sometimes clothing; dating is a mess, and love is a complete disaster.

Days gone by, we would have called The Layover a chick flick and been done with it, dismissed it out of hand as a movie only for women to go see with their girlfriends and not worth a second look.  But we’re a little more open-minded now, I hope, we want actresses to make their own career choices, to be raunchy if they choose, any one can enjoy that silly genre, the more the merrier.  And that’s all great, but this is still a bad movie, an awkward attempt at comedy, and hasn’t really done the movement any services.  At the beginning, you think it might work; the crass humor, the road trip, the sex, the competition, it’s fun, much like Sweetest Thing.  But it really takes a u-turn about midway through, and starts playing humanity’s least desirable qualities for laughs, which is simply off-putting.  WHM is hardly a director, I’m not sure he qualifies, and Upton is in no way an actress, so that doesn’t work, and relying on the hotness of your main characters only takes you so far; we need a little more, come on.  There were moments when I laughed, some slapstick that worked, but mainly you’ll eventually start wondering why you’re watching, and you probably won’t be proud of yourself for sticking it out to the end.