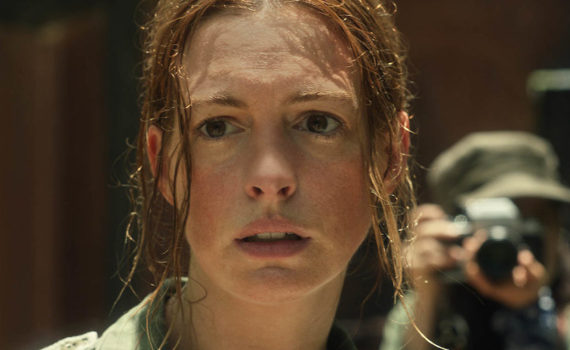 The last time director Dee Rees produced a Netflix movie, the result was incredible; 2017’s Mudbound was an Oscar-caliber film, with stunning performances and a heart-breaking story.  Well, her second time around didn’t go so hot; The Last Thing He Wanted is hellacious.  Not only is it bad, but it’s so bad you think it might be a joke, so bad you know it will be on the bottom of the year’s list no matter what comes out next, so bad that it might go down in cinematic infamy.  Quite a fall for a director who showed such promise and who succeeded on Netflix before; let’s hope it’s a blip, an accident, or maybe simply an unfortunate grouping of bad choices that no one would ever consciously make again.

Journalist Elena McMahon has been all over the world, has seen every form of violence, and has made it her personal mission to expose government coverups and the funding of foreign militants at the cost of human lives.  But now she finds herself in the middle of just such an arms swap, with her family brokering the deal.  Elena hasn’t had a very easy time; her mother has just died, her father is losing his memory, her husband divorced her, she had cancer, you name it and if it’s bad it’s happened.  Now she has a chance to break a story from the inside, if she can make it to and from the jungles of another nation in one piece, without being discovered, and with her humanity in tact.

Anne Hathaway is a tremendous actress, that will never not be true, but my god does she make some bad decisions.  I think this is how it went; she got famous, she literally looks like a goddess, she got cocky, audiences started hating on her because they thought that she thought that she was hot stuff, the pendulum of public opinion swung unfairly, she started freaking out, and now she can’t find a good project to save her life.  She hasn’t been any damn good since Les Mis and Interstellar, which is so sad, because she is a supreme talent.  But she makes another terrible choice here, and her character is wonky because of it, and so the entire film feels off from the beginning; disaster, disaster, disaster.  This film is dumb, dated, done, and deserving of our ridicule, a complete waste of time and our eye sight.  It has no heart, nothing to say, makes no sense, the acting is terrible, and after you watch it you feel like you’ve just been tortured on purpose.  The Last Thing He Wanted is the last thing we needed, and if Rees doesn’t acknowledge/move away from that, her career could be over before it really begins.