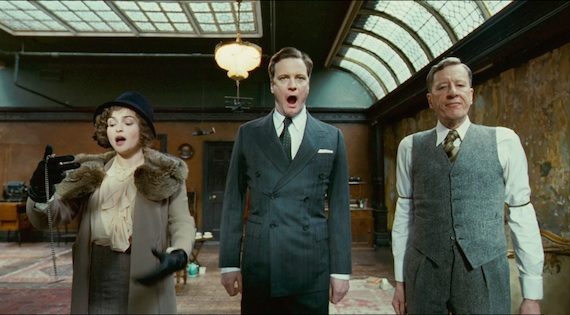 The King’s Speech is a film monument, nominated for twelve Oscars, winning Best Picture, Best Actor, Best Director, and Best Original Screenplay.  It was released on Christmas Day of 2010 with the purpose of being an Academy Award winner, of becoming a movie that portrayed history while making its own.  That plan doesn’t always work, audiences don’t always react the way studios imagine they will, but we couldn’t help love this story and its cast of tremendous actors, a perfect combination that doesn’t come ’round as often as we’d like.  This was director Tom Hooper’s first major picture, and I’d say it was an uncommon success, a spectacular cinematic achievement that deserved its honors then and, fortunately, still holds up now.

King Edward V of England is nearing the end of his life, and he leaves behind two sons; David the Elder and Albert the Stammerer.  Albie has always been known for his stutter, his inability to speak at all on occasion, and this defect has always been seen as a weakest of character, of a sign that he simply isn’t a man who could someday be King.  But King he will be, when he father dies and his brother abdicates the throne, choosing to marry a divorcee, which is strictly forbidden under the Church of England.  So Albert becomes King George VI and Britain enters a war with Germany; now is the time for a monarch to calm and lead his people.  But Albie can’t even speak to them, so he begins to work on his stammer with the help of Lionel Logue, an Australian who specializes in helping those who have lost their voice.  With Lionel’s aid, Albert begins to find the roots of this problem, as well as the courage within himself to become a King.

A multitude of stellar pieces came together to form this terrific film, and that’s what set it above its contemporaries, what afforded it all those awards.  For my money I’d have picked Black Swan or even The Fighter, but The King’s Speech is inarguably deserving, and it’s not hard to see why.  The music is incredible, the costumes are rich, the sets are stupendous, the cinematography is perfect, the flow of the film could not have been better, and the cast is one of the strongest British companies you will see on screen: Firth, Rush, Carter, Derek Jacobi, Jennifer Ehle, David Bamber from Rome, Michael Gambon, Guy Pearce, Timothy Spall.  Pretty impressive, as is the ability to seize this massive moment in history and stage it in such a personal way, to show us a man overcoming his demons while the world prepares to do the same.  This film is already an icon, a feat of arts, and will live on as long as the life-changing events it portrays.