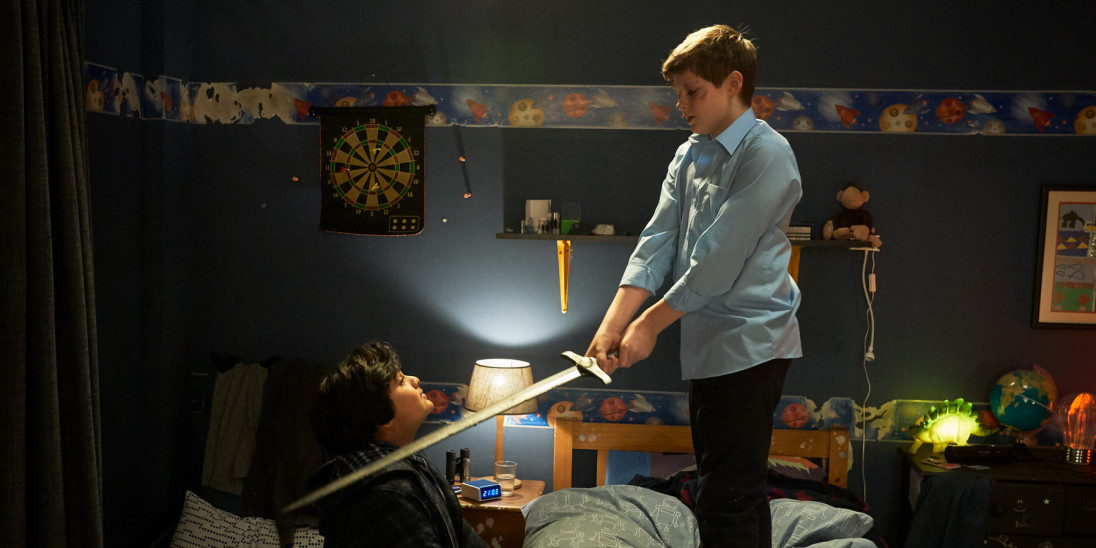 I have always been fascinated by the Arthurian legends, from The Once and Future King to Over Sea Under Stone, from Pyle’s illustrated classics to the classic film Excalibur.  And not simply from media, I’ve enjoyed these tales from a historic perspective as well, wondered at the legends, and dreamed of someday seeing them come true.  There will never be too many Arthur stories out there, or too many films using his mystique as a foundation, I for one simply can’t get enough.  The Kid Who Would Be King is a unique take on the old idea of seeing the king come again, but in the vein of a modern children’s film that adults can still watch with their families.  It’s not the greatest take we’ll see, but it sure is easy to enjoy, a smooth experience of fun and frights that starts 2019 off on a fine foot.

Alex feels alone at school, with only one friend, and alone at home as well, with only one parent.  He wishes he was special or had a special place in life, but he’s beginning to feel that the whole thing might be a hopeless exercise in popularity and power, with your role predetermined and unchanging.  He and his friend Bedders often run afoul of a pair of older kids, Lance and Kaye, who beat up Bedders and chase Alex.  On one such occasion, he hides in a construction site, finding a strange sword sticking out of a stone, but pulling it out with ease.  A new kid at school, calling himself Merton, tells Alex that he has been chosen as the hero of the age, that only he can defeat the evil Morgana, and that he will have to unite the kids, the school, and all of England in order to save the world. This kid is Andy Serkis’ son, which seems random, but he’s been doing voice-over work recently (Mary and the Witch’s Flower, Mowgli: Legend of the Jungle) and has done well, so now he’s trying his chops at acting.  He’s fine, as are the rest of the cast members, but none of them stood out as spectacular, all of them sliding by on their cool accents and CGI battles scenes.  Rebecca Ferguson and Patrick Stewart stepped in to lend their credibility, but the actor who stole the most limelight was probably Angus Imrie, young Merlin, who did a great job pushing the plot along and was fairly likable throughout.  The cast worked together well as a team and played well off one another, creating a group you could root for to succeed whenever the going got hard.

The film is reminiscent of The Mummy, if not as violent, but carrying the same action-adventure flair, with skeletons and magic and chases and escapes.  Obviously this movie is directed more toward children, and my own found it to be exhilarating; watching them watch was half the fun for me.  It’s a little scary, a little exciting, a little funny, combining in many ways to be just good enough to enjoy, never too much to push the envelope and risk any chance of failure.  I guess I’m saying that they played it a little safe, but maybe that also was for the kids, so that younger audiences weren’t expected to follow the story around too many tricky bends.  The fighting was fun, the actors were enjoyable, the morals were strong; I would recommend this family film to those who liked Goosebumps and appreciate that level of intensity and quality.