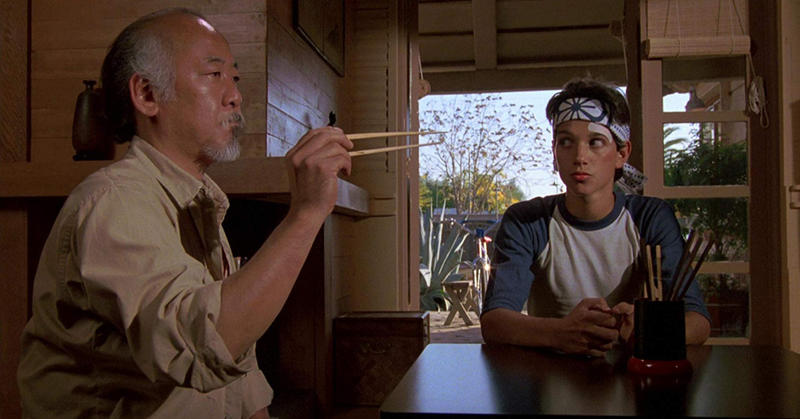 An all-time childhood favorite, Karate Kid has finally been seen by my children, and it has pasted the test of time.  One the greatest sports movie that we don’t think of as a sports movie, this franchise has been redone to death, but nothing compares to the original; it really is pure magic.  Watching it this time around, as an adult, through my kids eyes, as a film critic, I was struck by the purity of the film, how simply it stated what it wanted to say, introduced us to the characters it wanted to feature, and wasted no time pulling our hearts into a story like no other, a morality tale that I have never and will never forget.

Daniel is an Italian kid from New Jersey who now finds himself on the sunny coast of California, after his mom moves them there for a job.  Daniel is out of place, out of friends, and out of his comfort zone; he doesn’t fit in with these rich blonde kids from the Hills.  But he does meet a girl, Ali, she’s great, so nice; problem is, her ex boyfriend is a real creep, and he & his pack of bullies make life hell for our hero.  The solution; karate, which Daniel knows a little about, but not enough.  An old handyman from Okinawa, who works at Daniel’s apartment complex, reluctantly shows him the ropes, and it becomes a matter of principle, to show this boy what true courage really is, and what true friendship really means.

What a legendary film, one that will bring you to tears if you let it, based solely on the pure heart of the performers, and how much they draw your emotions into the story.  It’s a fairly basic plot on the surface; boy is new to town, meets a girl, falls hard, the bullies don’t like him, he’s got to prove himself, in so doing he learns about himself.  But there’s more to it than that, and maybe that magic is provided by Pat Morita, who plays Mr. Miyagi to perfection.  He’s the real star, he lends the film a certain seriousness, and Daniel’s karate becomes something much more important and meaningful than how we first saw it.  The music, the camaraderie, the classic scenes; it’s a childhood dream and an adult reality, a movie that works to impress kids and delight grownups, all wrapped in 80s glory and lifelong nostalgia.