Movie Review – The Jewel of the Nile 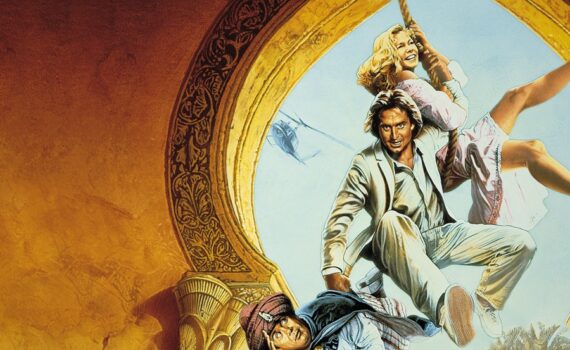 Movie Review – The Jewel of the Nile

If I thought that Romancing the Stone was terrible, I was living in a world of blissful ignorance, because Jewel of the Nile is ten times worse.  All exaggerations aside, this is one of the most bizarre & hideous films I have ever had the misfortune of watching, and I blame my younger self, who thought that these movies must be cool because they seemed so popular.  Well, be careful what you wish for, because I have now seen both additions to the franchise, and I can confidently say that my brain has permanently been injured.

After Joan & Jack met on their past adventure, it seemed like the world would be laid bare at their feet, with money to spend and a planet to conquer.  Well, romance grows cold and real life gets in the way; they aren’t even married yet and already driving each other crazy.  So when Joan gets the chance to go to Egypt to write a real piece on a famed ruler, she jumps to take it, leaving Jack behind to pout.  But she’s in real trouble, and he better come to the rescue, or else she might be dead in some desert by dessert.

Romancing the Stone was stupid, but Jewel of the Nile is an insult.  To Egyptians, to humans, it doesn’t matter; this movie shouldn’t exist.  It isn’t fun, flirty, funny, it’s just dumb, dirty, and disastrous, making you wonder who in their right mind let it come to screens.  The trio of actors are back and worse than ever, the dialogue is so mind-numbingly poor that you’ll want to die instead of hearing it, and every action sequence seems purposefully designed to make me tear my hair out; it does feel like this film only lives to torture.  Don’t watch it, don’t go back in time, don’t think that these two flicks were a festive frolic, just allow me to be your whipping boy, and stay away.