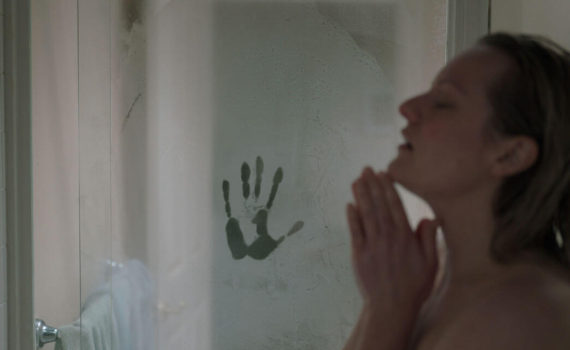 The Film Community is all about Elisabeth Moss right now, and I honestly can’t figure out why.  Maybe because they liked Handmaid’s Tale?  Because it can’t be her acting; every performance she gives is one note, that note usually being “generally upset”.  That’s not acting, that’s playing; I will admit that she can play a character, but I really don’t think she’s a talented actor, those things are very different.  Admittedly, I’m hard on actors and actresses, that’s an area that I focus firmly on when I’m watching a movie, and although I don’t have experience in the industry, my limited acting/theatre experience pushes me to be extra critical.  Moss simply doesn’t have it, which I know puts me in the minority for thinking, which is fine, I don’t mind, and which also doesn’t completely stop a film she appears in from being good.  Example; The Invisible Man, an entertaining flick that doesn’t require a Daniel Day-Lewis/Amy Adams performance to succeed, thankfully.

Cecilia is in an abusive relationship that has kept her trapped in a marriage she despises for years.  She can hardly think of leaving; every time she does she can feel her husband Adrian reading her mind, preparing to hurt her more, dominating her every decision.  He controls all her thoughts and actions, it’s a cycle she doesn’t know how to escape, and it’s slowly killing her.  So, one night, with minimal planning, she dares to escape, and seems to make it to her sister’s ex-husband’s place with her life & freedom intact.  But has she?  Because, soon after, Adrian kills himself, which would seem like the ultimate exhale, but Cecilia knows better.  She knows that he would never do that, and that he’s a brilliant scientist besides, working on an “optics” project that could change the world, and destroy Cecilia’s life.

So, Elisabeth Moss.  I don’t want to focus on her too much, because, like with any good horror movie, the lead actor doesn’t have to be Oscar-worthy in order to sell us on the idea that they are terrified, that the psycho who is after them has them running for their life.  I mean, I think most of us could play that part, most professionals in Hollywood could for sure, and Moss can as well, she does an absolutely fine job with what is asked of her here.  My issue arises when critics begin hailing Moss as the second coming, when they start talking about awards, when they go all-in on an actress who I just don’t think it strong enough to deserve the hype.  Moss is fine, she is fine for this role, and fine is good enough for this film, but she’s not the legend she is somehow growing to be; I don’t know how that got started but it needs to end.

Now, on to the film, which is everything you would wish it to be if you’re coming in, sitting down, and expecting a solid thriller.  Knives sliding off counter tops, trips to the attic, no one believing you, foggy mirrors; it’s all there, they leave nothing out, and so audiences will be pleased.  The scares are good, the feel is spooky, the sci-fi balances out the horror, the tech is cool, and the sound is intense; all the makings of a fun ride are here and they all work.  Aldis Hodge is the lone bright spot as far as acting goes though; Moss is over-the-top, Reid is as bad as she was in A Wrinkle in Time, Harriet Dyer as abysmal, and the Griffin bros. were throwaway.  Also, the writing wasn’t spectacular, wasn’t clever, which didn’t help Moss be Cecilia, she seems to constantly be fighting against the dialogue.  The Invisible Man was simply nice when it could have been awesome, it just wasn’t brought up a notch like others that have become the horror movie of their year; you might hear that this one is, but I don’t agree, I’d recommend Underwater instead, which is also a genre flick but built with better tools.