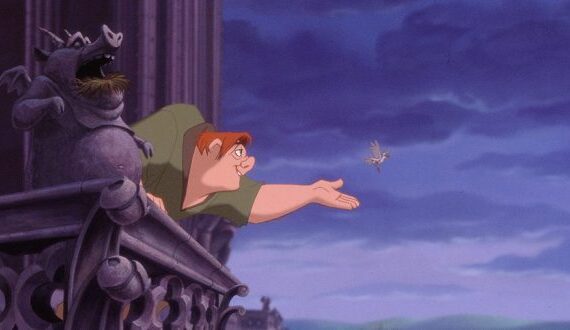 I was under the assumption that Hunchback of Notre Dame was worse than lesser Disney, that it was terribly lesser Disney, and that’s just not the case.  While it will never be loved the way its contemporaries are (it simply can’t be, it isn’t magical in that same way), it is nevertheless a solid bit of animated adaptation, and a cool musical in its own right the way that not even Disney can often accomplish.  Like Pocahontas, done around the same time, it is theatrical rather than cinematic, and while that doesn’t make it wonderful on screen, that still lets certain pieces shine, and we can still find pleasure in that.

The story of Quasimodo is the stuff of legend; the deformed bell ringer, hidden away in the church so that sensitive eyes won’t see him, frightened of the world below because he’s never known its joys.  But when Quasimodo sees the lovely Esmeralda for the first time, at the Festival of Fools, he understands that there are some emotions he wants to feel.  Helped by the gallant soldier Phoebus, harangued by the evil official Frollo, Quasimodo will have to come to terms with his old life and fight for his new, because there is magic out there, you just have to be brave enough to grasp it.

Hunchback is lower tier Disney, that’s for sure, it’s no Aladdin or Little Mermaid, but it also doesn’t need to be; it’s a musical, not a Disney princess flick, which are wonderful, but that’s not what this movie aimed to be.  The blonde hero and the dark-haired damsel are only pieces of the plot; Quasimodo & Frollo are the real players in the play.  Especially Frollo, who, my god, steals every scene he’s in like he’s a tractor beam; that character is ridiculously enthralling.  He’s so evil, his songs are so good, and he channels a lot of Les Mis, which is fun to watch.  Again, this film needs to be viewed as theatre, then it’s not so bad, it’s fairly cool, with Alan Menken and Stephen Schwartz gesticulating their genius in our faces, as they are wont to do, and love, of course, conquering all.