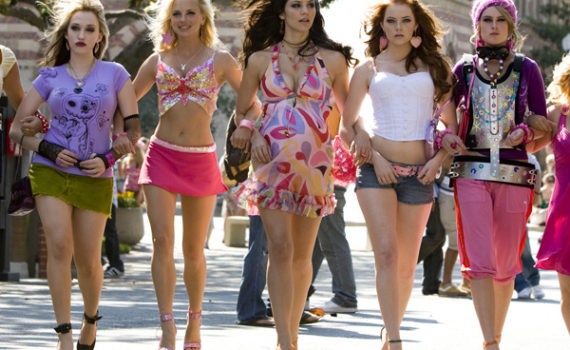 I wanted to give House Bunny a chance because some people consider it somewhat of a cult classic, and I’m not really mad at them for recommending one of the dumbest movies ever made, I’m honestly just disappointed in myself for watching it.  I don’t know what I was expecting; a hidden gem I guess.  But what I got instead was stupid on top of stupid until the whole thing toppled, killing us all.  This is an utter embarrassing even to sophomoric comedies, if that genre does anything for you, because there have been a few solid ones before, but this definitely ain’t it.  And someone thought this was a film worth making, starring in, and showing to the public; I weep for the future.

Shelley is a perspective but aging Playboy bunny who loves her life at the mansion but wants something a little more prestigious; the centerfold.  When she thinks Hef isn’t giving it to her, she leaves the grotto to find something else, and accidentally stumbles across a college campus, or, more specifically, a sorority.  A House Mother would be right up her alley, if any sisterhood would accept her, but only one is so down on their luck that they need Shelley’s help, and they’re about to lose their charter.  If Shelley can help Natalie and the girls find pledges, meet boys, and throw parties, she might just save the day, and find her true calling in turn.

Anna Faris is pretty funny, and she has her moments, mostly “the eyes are the nipples of the face”.  And Emma Stone has talent, she has her moments as well, mostly being the awkward nerd who has a heart of gold hidden somewhere behind her thick glasses.  But neither of those facts make House Bunny even semi-watchable, because the rest is complete trash.  It’s not funny, it’s not sexy, it’s not clever, it’s not entertaining, and it isn’t anywhere near a comedy of acceptable quality.  The story is moronic, the characters are stereotypes, the acting is abysmal, and by the end you’ll feel so much stupider than when you came in.  The cast is very odd: Faris, Stone, Hanks, Kat Dennings, Hugh Hefner, Christopher McDonald, Beverly D’Angelo, Katharine McPhee for some reason, Rumer Willis for an even stranger reason, Holly & Bridget & Kendra, Matt Leinart & Dan Patrick & Shaq.  It’s nonsensical, insulting, pointless, idiotic, and should be avoided at all costs.