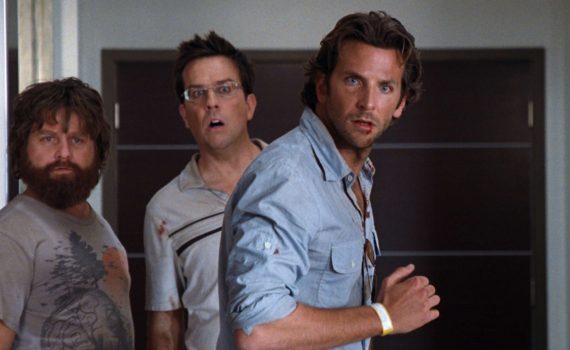 One of my buddies wanted to watch either the 2nd or the 3rd Hangover films when I visited him, I can’t remember which, so I watched the others beforehand so I’d know what was going on.  I think that’s the only way to watch these movies, in preparation for or as part of a bro day; they are worth exactly that.  As they stand, at least thinking about the original in particular, these are impacting films, even while being moronic; think Old School or Wedding Crashers.  Yes they’re ridiculous, yes they’re mostly misogynistic, but sometimes men are entertained by simple jokes and off-color humor; you make your own determination on whether that’s OK, but I can say I’ve laughed my fair share at things in movies I probably shouldn’t.  I know better but I still laugh, and then I give the film a mediocre rating, because I know it’s no good but I still had a good time, if that makes sense.  That’s The Hangover for ya, a movie that you shouldn’t encourage but can’t stop yourself, an icon in its own right that’s also a frat boy nightmare.

Doug is getting married, and his two best friends are throwing him the bachelor party of a lifetime in Las Vegas, with his new brother-in-law Alan along for the ride, even though he’s a bit of a weirdo.  The Wolfpack, as Alan calls them, are a foursome looking for a good time in Sin City, and they’re about to have it, even though they won’t remember a thing.  After taking some drugs, Phil, Stu, and Alan wake up the next morning with no recollection of what happened overnight, and missing the groom himself.  They don’t know where he is, they don’t know what they’ve done, all they know if that their room is a mess, Stu is missing a tooth, and there’s a tiger in the bathroom.  Yes, a tiger, and that’s not the strangest it’s gonna get, as the trio hit the strip to solve the mystery of their missing best friend, making enemies aplenty along the way.

It’s hilarious and awful at the same time, and you really shouldn’t laugh even though you know you’re going to.  Illegal drugs, naked men, excessive gambling, Mike Tyson; it’s a windy road our heroes travel, and it’s all so fratty that you know you should look away, but man do you keep peeking through your fingers for more.  And it’s funny, I laugh every time I see it, especially at Alan, Zach Galifianakis, who steals the show and couldn’t be more ridiculous.  Cooper was big in this movie, he has come a long way since, and the rest of the cast rounds out nicely: Justin Bartha, Heather Graham, Jeffrey Tambor, Ken Jeong, Rachel Harris, Mike Epps, Rob Riggle.  Shocking events lie around every corner, but that’s what makes this movie fun, and the complete loss at which these guys find themselves is just too amusing not to watch.  Again, not the brightest comedy, don’t expect wit from the Wolfpack, but The Hangover is a bit of an instant cult classic; whether you can stomach the booze & buffoonery is up to you.