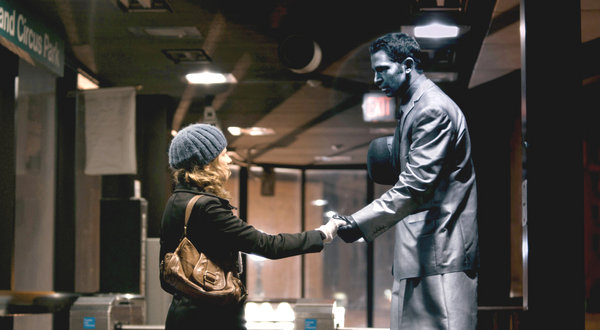 The Giant Mechanical Man gets an A for effort but a D for delivery; some students just aren’t meant to take the hard tests.  Not many from the cast of The Office were made to go on to do great things, the talent level simply isn’t there, not to make the jump to serious cinema anyway.  Those who could do it left the show to go do it; Steve Carell, Amy Ryan, that’s about it, unless you count Ed Helms and Craig Robinson and all the stupid stuff they’ve done since leaving Scranton.  No, the show worked because it had magic, not because its actors were phenomenal, and to think they could realistically go further is silly, or perpetuated by very bad taste.  Giant Mechanical Man feels like a film that never had the ability to get off the ground, weighed down far too heavily by the ineptitude of Jenna Fischer, and then ultimately cancelled by its own lack of new ideas.

Janice is a little unsure what to do with her life; she can’t even fake the appearance of commitment long enough to keep a job as a temp.  She’s fired, kicked out of her apartment, has to move in with her sister, gets a job selling juice at a zoo; things aren’t great.  Meanwhile, Tim isn’t doing much better.  He’s a performances artist who dresses up like a tall robot and collects spare change, which, shockingly enough, leads to his girlfriend dumping him and everyone thinking that he’s, generally, a loser.  So he gets a job at the zoo too, and that’s how he & Janice meet, though falling in love is not quite as simple as stumbling into one another.  There are issues, exes, communication errors, pushy self-help gurus; the world is a strange place.  But love conquers all, or so they say, meaning that there’s always a chance that your story might end with a happily ever after.

I’m not someone to be unable to see an actor outside their famed role, but Jenna Fischer is only Pam.  I swear that has more to do with her being a bad actress than it does with me being stuck in one mindset; she’s just not good enough to reach out and take on other projects successfully (I once saw her play a prostitute and it was very uncomfortable).  Chris Messina is better, but not by much, and the film they were both tasked with filling up with intrigue, comedy, and chemistry simply had too many holes losing air too fast.  The story was thin, although I did like its simplicity; it never asked audiences for too much, we were just here to observe, I just wish that what we were observing had been better.  The side cast was a mixed bag; Malin Akerman, Topher Grace, Rich Sommer, Bob Odenkirk, Sean Gunn.  Topher kinda stole the show, but his wacky character only drove the plot so far along, and the rest of the team was unable to drag us the rest of the way, leaving Giant Mechanical Man lost somewhere in a stretch of cinematic history you will definitely not remember.