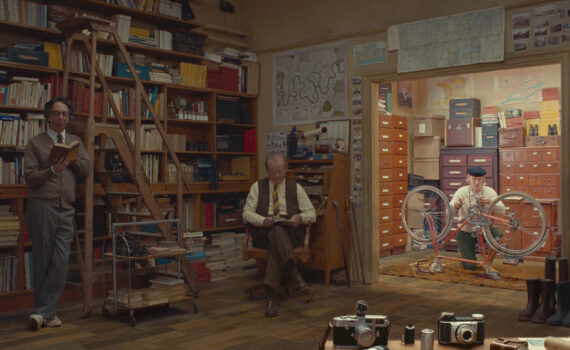 Do I even need to say that I love Wes Anderson and that he is my favorite director?  The name of my website is, after all, Archer Avenue, which is a reference to 111 Archer Ave, the address of the Tenenbaum house in The Royal Tenenbaums.  But it’s not just one film, it’s his whole style, mind, and filmography: Bottle Rocket, Rushmore, Royal Tenenbaums, Life Aquatic, Darjeeling Limited, Fantastic Mr. Fox, Moonrise Kingdom, Grand Budapest Hotel, Isle of Dogs, and now French Dispatch.  There are some I like less than others, of course, but the man’s a genius, if one who sometimes (too often) gives into his own overindulgences.  Unfortunately, The French Dispatch is one from that category; an overworked, overindulgent, oddly upheavalous movie about nothing and for no one that I won’t remember very fondly very far down the road.

Stationed in Ennui, France but publishing for Liberty, Kansas (?), the French Dispatch is a newspaper that covers current events and culture, written by an eclectic band of independent journalists, who all found their way into the life of Arthur Howitzer Jr, the editor, for some reason or another.  Immediately shutting down after Howitzer’s death, the paper is distributed in one final issue, with four stories headlining the edition: Herbsaint Sazerac’s tour through the city of Ennui on his bicycle, J.K.L. Berensen’s memories of the artist/prisoner Moses Rosenthaler, Lucinda Krementz’s recounting of a children’s rebellion referred to as the Chessboard Revolution, and Roebuck Wright’s first-hand account of the kidnapping of the son of the Commissaire of Ennui.  Finally, Horowitz’s obituary rounds out the paper, and puts a bow on years of strange work.

Anderson needs to be reined in; that’s a known fact about someone who’s brilliant, of course, but also undeniably bizarre.  When he’s left to simply vent his art into the room, we are overcome with the odor of opulence, and we lose sight of why we came to visit in the first place.  His cinema needs a balance of humor, humanity, silliness, because what he brings to the table is so rich, so decedent, so overpowering.  With French Dispatch, we get too much meal and not enough breaks, too much of what makes him hard to watch and not enough of what makes him fun & free.  Basically, this film is overindulgent, overly boring, and not that great.  But, the movie is saved both by the cast and by one vignette that shines above all the others; the Concrete Masterpiece, which really is a tiny masterwork all its own.  Other than that perfect story, the cast is the only thing to love: Benicio Del Toro, Adrien Brody, Tilda Swinton, Lea Seydoux, Frances McDormand, Timothee Chalamet, Jeffrey Wright, Bill Murray, Owen Wilson, Bob Balaban, Willem Dafoe, Ed Norton, Saoirse Ronan, Fisher Stevens, Anjelica Huston narrating.  Much went right, much went terribly wrong, Anderson’s art is on display, it’s not all pleasant, but it’s always interesting; French Dispatch is a film to experience but not one to enjoy.