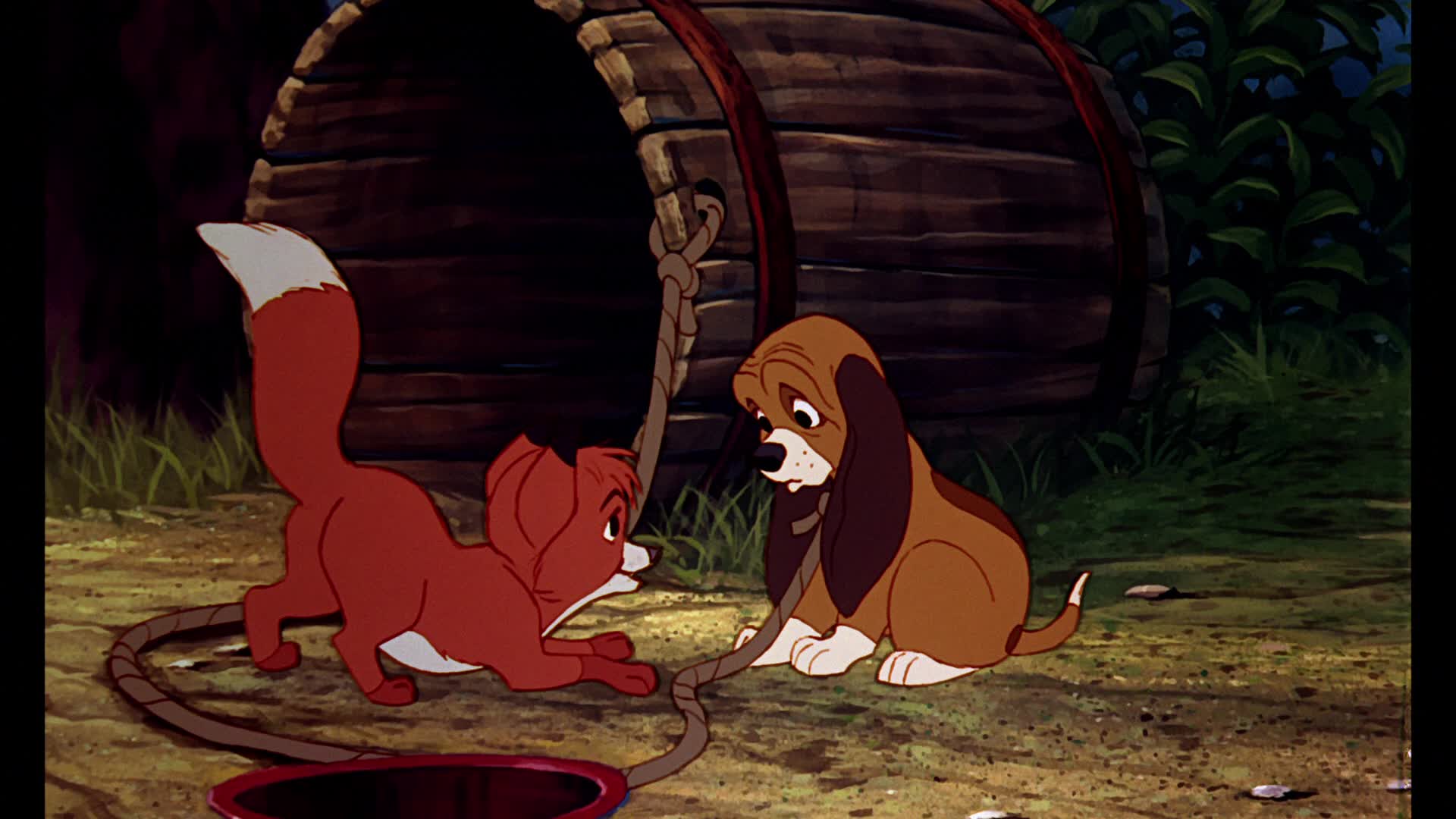 I think The Fox and the Hound might be the movie that has made me cry the most times total.  About Time did a number on me in a way I can’t explain, but that was just the one watching; Fox and the Hound will getcha where it counts over and over again and not even apologize, dammit.  As a kid it was the pups and the plays, the friendships and the betrayals, the ultimate bravery of standing up for your pal.  As an adult, it’s all that emotion combined with having lost my own friendships, having watched my children develop theirs, and every little crevice of my heart being exposed to what amounts to a platonic star-crossed love story.  Yeah, this film is pretty special when it comes to the Feels Department.

Orphaned when he was just a little guy, a fox named Tod is adopted by a kind farm lady who lives all on her own, and the pair become very close as Tod grows.  At the same time, her neighbor, a hunter with a mean ol’ dog, gets himself a new little long-eared puppy named Copper, who loves to track and romp and bay and play.  Although they are natural enemies of sorts, Tod & Copper develop a friendship, since they hardly know that they’re “supposed” to fear each other, and despite the insistence of other animals that no good will come from a fox playing with a hound.  As they grow, they do find that their are unique obstacles in their way, and a fair amount of danger, but love conquers all, as the say, and so does being a true friend.

What a lovely story, with a wonderful underlying meaning.  There’s a lot being said here under the guise of a cheesy kids movie, themes of race and differences and unity and understanding; it might be muted or glossed over, but it’s still there, and that’s saying something.  There are messages to hear if you’re listening, and I think that’s great, especially when it concerns younger audiences, because they are very perceptive, and they feel more than they can consciously understand.  Watching Fox and the Hound is fun, sure, but it also imparts some empathy, or at least allows us to empathize, and that’s pretty important.  Now, on to the film, which I think is underrated; a great voice cast (Mickey Rooney, Kurt Russell, Jack Albertson, Sandy Duncan, Corey Feldman, Tigger, Piglet), some whimsical characters, stellar animation, heart-breaking music, and while you can ignore the musical numbers themselves, and while it’s definitely no Disney Princess Classic, there are classic elements here that make this film a very bright light.