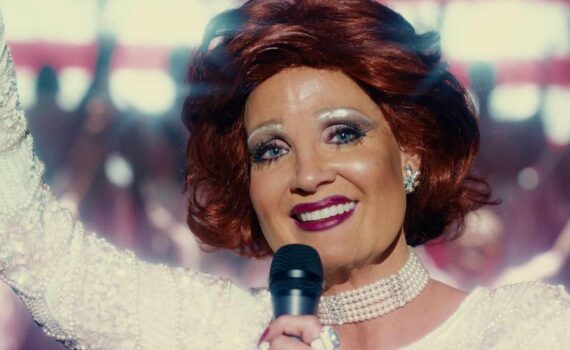 My favorite quote from Captain Fantastic, a movie I absolutely dig, is “We don’t make fun of people. Except Christians.”  A better summary of my spirit does not exist; I don’t condone hate, but man do I sure hate Christians.  Religion in general is one of the most evil things that exist on our planet, organized religion even more so, evangelical Christianity times ten, and so to watch The Eyes of Tammy Faye, a film that doesn’t quite judge modern Christians, but shows exactly how moronic they can be, how twisted & awful & ugly & dumb, well, that’s right up my alley.

Jim & Tammy Faye Bakker were among the first televangelists in America, walking in the footsteps of & working alongside Pat Robertson, Oral Roberts, and Jerry Falwell; the biggies.  The Bakkers started humbly, as young ministers with a passion to preach Jesus’ love to the masses, but Jim had the idea that God didn’t want him to be poor, that God had plans for him, that God wanted him to be a wealthy, powerful leader of men; Tammy’s goals with a little more simple.  With puppets and song and good cheer, she tried to fit into the lavish existence that Jim was creating, but, of course, got swept away in the greed & drugs & illegalities.  Their downfall is the stuff of legend, and a warning to anyone about to believe blindly in a supposed higher power or a smiling face on TV; don’t.

Jessica Chastain, with a wild performance, has perhaps never been better, Andrew Garfield slides right into his bizarre role with the expertise we’ve come to expect, and Tammy Faye fires on all cylinders, if the cylinders you expect are simple; 1-2-3, punch punch punch, smack televangelism/evangelicals/non-denomination church in its fucking face.  That people believe this crap is a joke, how they can be taken in is a mystery, and the fact that this pair of Bakker assholes got what was coming to them is just so delicious.  We don’t make fun of people except Christians, that’s my motto, and oh was it nice to relish in the mockery of religion over the course of two hours with this film.  And it’s not all just low blows; this is what happened, these are the actions of these detestable people, this story is told rather simply over a long period of time, which might not make the film that exciting or that much of a creative accomplishment, but it sure does make it easy to follow and swallow.  Never let anyone do this again, dismantle the religion-for-money scheme, learn that from this movie, and it will have done its job.