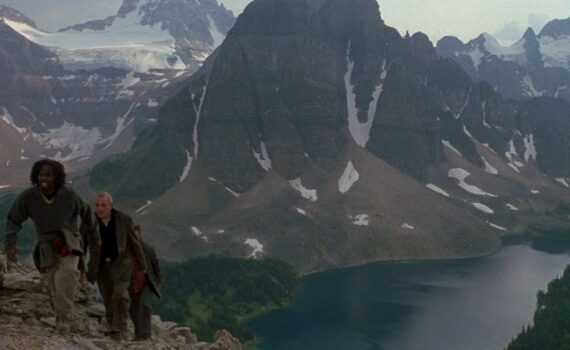 The term ‘hidden gem’ might be overused, but it has probably never been used more correctly than in reference to The Edge, one of the very best under-the-radar films of the last 50 years.  It has everything going for it and delivers on every level; that might sound like an exaggeration, but I tell you sincerely, this is perfect movie-making and about as great a cinematic experience as audiences are likely to have.  The Edge is drama of the utmost intensity, but delivered to us in a way that’s as popcorn as any action flick, melding genres into a stream of events that you can’t turn away from and exhibited with a talent that you hardly ever see.

Charles is a billionaire who is married to a model, a private jet owner who also happens to know every random fact on the planet; fortune has favored this man heavily, and his age hasn’t slowed his wits.  On a photo shoot with his wife and her photographer, trying to live a little and get out of the city, Charles finds himself oddly in his element.  He has the wilderness knowledge, but has never put it to any practical use …until now.  When his amphibian plane crashes, Charles is stranded in the forest with Bob, the photographer, and Stephen, the assistant, in a situation that’s cold and dangerous and dire.  It becomes even more so when a bear picks up their track and decides that he is hungry; surviving the weather is suddenly the least of their concerns.

I assume there are a large number of people who have seen this movie, but I feel like there may not be a large number who remember it and remember just how damn good it is.  Even the cover of the VHS was awesome, just the two main actors snarling like their lives are in jeopardy, selling that emotion to us even before the film begins.  And then, my god, Hopkins & Baldwin put on a master class, convincing us that they were dying, giving us layers beneath just surviving, reeling us into a backstory that never went away; I have hardly ever seen better.  The music is phenomenal, the setting is severe, the terror is real, and these characters are two I have never forgotten.  If it’s been awhile, do yourself the favor of re-watching something spectacular, because it hasn’t aged a day.