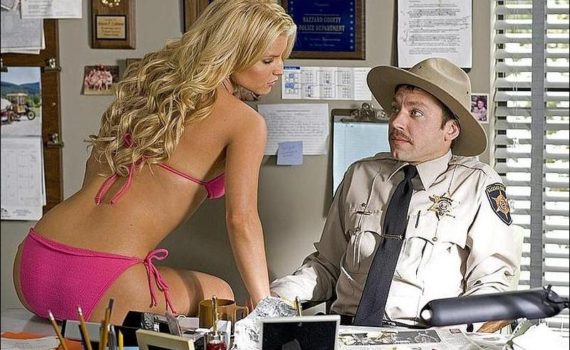 The Dukes of Hazzard may just be the stupidest movie I have ever seen.  Maybe not the worst, maybe not the most amateur, maybe it’s not a complete disaster, there might be one or two things I could point to and say “that was alright”.  But it’s definitely the stupidest thing that I’ve ever voluntarily put before my eyes, and I’m still not quite sure why I chose to do that.  I guess I was bored, or maybe wanted to see Jessica Simpson at her peak?  I don’t know, perhaps I temporarily lost my mind, or just consciousness, it’s hard to say.  But I watched it, and I regret it; at least the bottom of my list has some new company.

Cousins Bo & Luke Duke are the terrors of Hazzard County, Georgia, but boy are they having one hell of a time.  They run moonshine for their uncle Jesse, they protect their other cousin Daisy, they run from the local law, they frustrate the local rich boss, and they just wanna have some fun; just two good ol’ boys, never doing no harm.  Luke is obsessed with the ladies, and it gets him into trouble, but Bo has his mind on his car, the General Lee, and winning races so that he can prove he’s no loser.  Actually, there’s a big race in town coming up, and everyone will be there, so it’s his big chance, as long as he can stay out of jail and in the good graces of the money that runs the county.  But it seems like something fishy is going on in town, with Bo & Luke the only two who can do anything about it, so start that engine boys, and go find yourselves some adventure.

I like Super Troopers as much as the next guy, but that was a one-off; Jay C. & Co. didn’t need to make any more movies.  But they did, and they sandwiched Dukes of Hazzard right in between Club Dread and Beerfest, and the result was devastating.  Those goofy guys may have been the best part of the film, in small roles, so I guess that worked, but literally nothing else did, which is a problem.  Wait, I’m wrong; Jessica Simpson worked, she was both sexy and one of the stronger actors, which is saying something about the rest of them.  Really, it would be an incorrect compliment to even call the rest of the actors; Seann William Scott and Johnny Knoxville are professional idiots, not professionals thespians.  They were so dumb it was painful, and so was everything else, really: the plot, the writing, the characters, the references, the clunky attempts at being progressive, the moronic jokes abounding.  Even the broad cast was weird: Burt Reynolds, Willie Nelson, Lynda Carter, .  It was a film for small brains, and not even an entertaining version of that vacant concept or of the show it was trying to honor, just a stupid, stupid failed joke that you’re very sorry you were let in on.