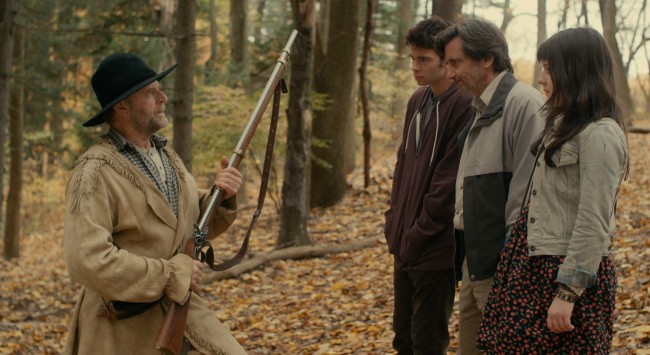 Little Miss Sunshine was a film that caught me off guard with its perfection.  It took the classic road trip story to a higher level and painted a picture of a family in crisis as well as any film had ever done before.  It was funny, heart-felt, real, sad, and ultimately uplifting; everything that The Discoverers aspired to be.  The latter could be considered an indie version of the former, or at least the comparison wouldn’t leave my mind once I thought about it, and I couldn’t help feeling a little let down that this family walked instead of driving a VW bus.  The two films share a lot of the same story elements, a few of the same character types, and a general feel that permeates the plot.  But where Little Miss Sunshine stuns, The Discoverers droops, proving to be a mediocre reboot of a story that we’ve seen before and will see again.

Lewis Birch is a man who has failed at life.  He used to be a respected professor, used to be married, and used to have a promising career as a novelist.  But now he’s got nothing.  He’s a teacher at a tiny college, his wife is off with her new rich beau, his kids are distant, his apartment sucks, and his latest book in an unwanted 6000 pages long.  One last chance remains; a conference in Oregon where someone might pick up Lewis’ book and make him a success again.  So he & his children set out on a road trip under the guise of a vacation.  However, when his mother suddenly dies, a detour is in order, one that might be longer than expected.  Lewis’ grieving father escapes reality by going on a discovery hike in the woods with history re-enactors, something Lewis was forced to participate in as a child.  So now he’s walking through the forest with his dad one more time, when he’d rather be doing anything but.

There are just so many elements that remind me of Little Miss Sunshine, unfortunately so since that movie is so much better than this one.  The road trip, the father with a pipe dream, the dysfunctional children, the death of a parent, even the oddity of the journey itself.  Instead of a beauty pageant, this film features Lewis & Clark enthusiasts reliving the historic pair’s expedition to the Pacific Ocean.  Pretty weird, and probably the best part of the story.  Forced to dress up in period garb, the family must fit in to help out Grandpa; funny stuff made more so by its juxtaposition with the heavy nature of the base plot. But the rest failed to support what is a good idea on paper.  The acting was only OK, the dialogue wasn’t impressive, and the pace led to more than one dull moment where I felt myself drifting away from what was supposed to be grabbing my attention.  The Discoverers is only good, taking a cool premise and failing to lift it to any special level.