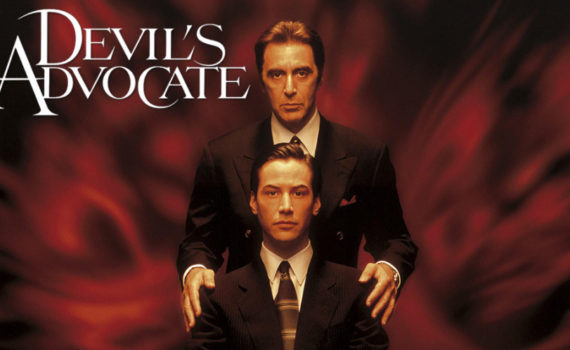 Had it not been for the casting of Keanu Reeves, The Devil’s Advocate might have been the best movie ever made.  I exaggerate of course, but only a little, I really think this film is that special, and I really think Reeves is that debilitating.  He’s done better recently, I think he finally grew up, but he’s been awful countless times, and I’ve never been a fan.  Now, you have to remember how big a deal he used to be, how huge a star he was, despite his lack of talent, with movies like Point Break, Dracula, Speed, Johnny Mnemonic, and Chain Reaction all coming out in the 90s before this film.  But watching back, I don’t see how anyone can claim otherwise, would even try to make a case that he was a tremendous actor who elevated the features he was in.  If it had not been for his overacting, I honestly think that Devil’s Advocate would be remembered as being near-perfect, a scintillating drama that has it all.

Young and suspiciously perfect lawyer Kevin Lomax has yet to lose a case, either prosecuting or defending, and Gainesville, Florida is becoming too small for his big ego.  He knows juries so well, almost magically well, can tell which way they’re leaning by the shoes they wear and they way they hold their heads, and that has helped him become the best damn trail lawyer in the country.  New York City even gets wind of his success, and one firm, run by the vivacious John Milton, asks for Kevin’s services with check in hand and perks to spare.  So he and his beautiful wife Mary Anne move to the Big Apple to become hot shots, and everything seems to be looking up.  But how can Milton possibly be so rich and powerful, how can Lomax continuously win, and why does the competition keep dropping like flies?  It’s almost as if the hand of God is touching events, or perhaps the hand of someone much less heavenly.

I know it sounds dramatic, but I really do think that Devil’s Advocate is almost perfect, that it could have gone down as a phenomenal film in the annals of cinematic history, had it been for one major casting change.  I get why Reeves is the lead, he was a big new name, he was hunky in a very fresh way, it makes perfect sense.  But he’s definitely the weakest link, maybe the only weak link, and looking back on the film 20 years later, that fact seems rather obvious.  Even he has a couple nice scenes, but the rest is pathetic; his accent, his melodrama, his fake swagger.  It’s really too bad, because everything else is flawless.  It’s an awesome story, laden with philosophy, and you’ll find yourself taking the side of the devil on your shoulder more than once.  And the other actors, holy cow, they are incredible; Pacino in a role he was born to play, Theron in an early part that already showed her amazing ability, Jeffrey Jones (Ed Rooney), Connie Nielsen, Craig T. Nelson.  They all worked, the plot works, the mood is intense, the dialogue is excellent (apart from the way that Reeves delivers it), it’s sexy, it’s wrong, it’s weird; I wish I could love it 100%.  But I’ll take it as it is, which is still strong enough for a rotational re-watch and a place on my shelf.