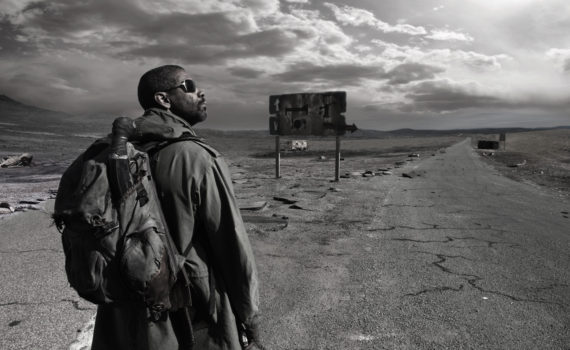 The Book of Eli is basically a movie you should probably watch with your dad and try not to pick apart too much, because it neither deserves nor can withstand a large amount of scrutiny.  Fury Road it is not, The Road is could never be, but Waterworld it surpasses in quality, so lower some expectations and enjoy some post-apocalyptic gun play, because that’s exactly the level this film both aspires to and achieves.  It almost feels like a graphic novel come to life, or like what The Dark Tower should have been, more than what it was, a mix of sci-fi and Western that we’ve generally come to enjoy, but unfortunately also with a slew of problems that keep it from becoming something special, something that can reach that upper echelon.

The world has moved on, to steal one more nugget from Stephen King, and nothing is as it was.  Thirty years after the survivors of The War emerged from underground onto a scorched surface, society has struggled to find the order they once had.  Most humans can’t read, some went blind in The Flash, the roads are unsafe, food and water are scarce, everyone fights to see the next day, and no one has control.  But a Walker named Eli travels west across what was once the U.S. with a book in his possession that he thinks can fuel a new age, on a quest that he thinks was ordained by a higher power.  He’s not the only one who wants the book though; a despot christened Carnegie is always on the lookout for knowledge, for power, and he’s not about to let Eli walk through his budding town without a challenge.

The good parts of The Book of Eli are many, which saves it when an equal number of negatives rear their ugly head.  The theme music, the comic book feel, the sepia cinematography, the rapid action, Denzel’s demeanor, Oldman’s villainy, the post-apocalyptic atmosphere, humanity clinging to the edge of extinction; there are a lot of pieces to like here, and a lot of reasons to watch, as long as you don’t start picking apart what’s flashing before your eyes.  Because there are problems are well: questionable acting, a sketchy story, an over-arcing theme that is hard to get behind.  And Mila Kunis, god bless her epic hotness, has the worst performance to ever grace a dusty, dirty set, failing even to appear 80% human.  Really, it’s awful, and the rest of the cast is mostly hit or miss: Ray Stevenson, Tom Waits, Jennifer Beals, Michael Gambon.  If you’re willing to watch to simply appreciate Denzel’s excellence and the plot’s intrigue you won’t be disappointed; just don’t look too close and start pulling at the threads, because you’ll just ruin your own experience.