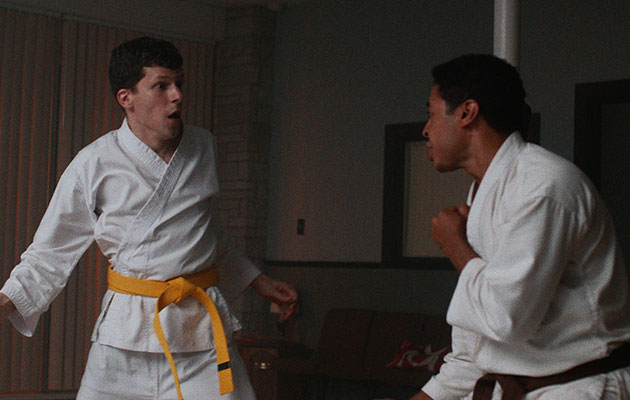 There’s regular actor Jesse Eisenberg, and then there’s bonkers actor Jesse Eisenberg, and I prefer the latter.  If you’ve ever seen The Double, you know what I’m talking about, how good he can be when asked to be a certain type of paranoid character, and I’m gonna go out on a limb and say that director Riley Stearns has seen that movie too, because there are a lot of similarities between it and The Art of Self-Defense; mostly just in a good way, I’m not accusing anyone of blatant thievery.  Eisenberg as a neurotic, in a weird parallel world that’s kinda f-upped, with a strong female presence beside him, with one identity that’s weak and one that’s strong; yup, sounds like both movies, I guess I just don’t mind a double helping.

After being mugged one night by a group of thugs on crotch rockets, Casey is even more afraid of life than he already was, and that’s saying something.  He’s an accountant, a loner, a punching bag for whoever wants to make fun of him, and he basically hates his daily existence.  But all that’s about to change when Casey discovers karate, and realizes that he had toughness in him all along.  The sensei at the dojo he walks into is a hard man, a merciless trainer, but Casey thinks that’s exactly what he needs, and it helps him take charge of his own destiny.  It’s all going swimmingly until the classes become ultra-violent, with secrets behind every door of the studio that show things are never quite what they seem.

It’s stranger than it sounds, but also more accurate than you would believe; you’re just gonna have to trust me and drive right in, because there’s really no way of explaining this film.  Part of the movie is a real lesson on marital arts culture; I took tae kwon do, the attention to detail is persistent, although thankfully my master was literally the nicest person I’ve ever met and specialized in kids with autism.  So my experience wasn’t like Casey’s, but you can tell someone did their homework, and then went down a rabbit hole that leads audiences to a place that’s surprisingly FUBAR.  This is dark farce in a way, pointed critique in another, with Eisenberg as the hub the story centers around, playing a role that is so perfect for him its scary.  This is also how I like to watch him work, these bizarre characters, and Nivola & Poots were excellent as well, two incredible actors who can, apparently, do anything.  Watch with a wonky eye and a bleak sense of humor to fully enjoy one of 2019’s oddest curve balls.