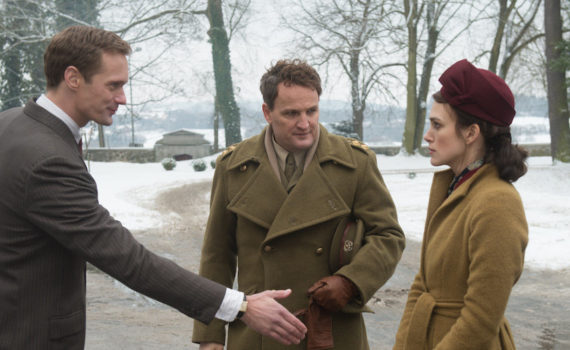 James Kent is a TV director who has done one real movie, Testament of Youth, which was a wonderful surprise and is a splendid film.  You should really check it out; it stars Alicia Vikander, Kit Harington, Taron Egerton, Dominic West, Emily Watson, and is a really incredible blend of romance, war, coming-of-age, and the early years of feminism.  And if I lean too heavily in that movie’s direction, it’s only because Kent’s second try is equally disastrous as his first was successful.  The Aftermath is everything we don’t want from the genre, a completely lifeless blob of recycled pulp that has no business being in your local cinema.  Whatever he did right the first time, Kent did wrong the second, and no amount of star power in the world could save a film that falls this flat.

WWII has ended, and the Allies occupy Germany with their armies to begin a pathway to peace.  But first, old hatreds rear their ugly heads, and violence isn’t quite done with its time in the limelight.  Nazis still rally underground, protests pop up at every embassy, food shortages during the harsh winter are a major problem, and harmony seems a long way off.  For the British in Hamburg, the mission is simply; quell rebellions, establish order, get Europe back to normal, but that’s easier said than done.  Lewis & Rachel Morgan move to the city so that he can take command of English forces, and they take control of a wealthy architect’s house for the duration of their stay.  Living in the home with them are the former owner and his daughter, Stephen and Freda Lubert, who struggle with accepting foreign enemies into their home.  Both sides have suffered losses, both families have been injured, and neither can forget old grief, as they all struggle to find some semblance of their once-happy lives.

The story isn’t the problem, at least not the base of the story, because we don’t touch enough on Post-War drama; there’s a lot there to sift through.  Nazi sympathizers, good Germans, angry Allies, greedy men, the collapse of an empire, the rebuilding after years of war; some heavy stuff.  And this film prods at a lot of wounds, covers many uncomfortable topics, from death to new life, and had definite potential at some point, before the actual movie started rolling off the assembly line.  After you’re invested and watching, after you’re interested in the plot, that’s when the rug is pulled out from under you, and that’s when the disaster starts.  First, Skarsgard & Clarke are asked to change their accents, and that fails miserably, so, bad start.  Then a romance blossoms out of literally nowhere, leaving audiences so confused and completely blindsided.  And it just gets worse from there; odd sex scenes, weird subplots, awkward conversations, nonsensical decisions, and a total mess of anything resembling proper storytelling.  The acting doesn’t help, but it wasn’t helped itself by the script or by the direction, both of which felt cheap and lifeless.  The Aftermath was dead on arrival, a complete bomb of a love triangle that also tries to be a war story, an utter failure to produce something new and fascinating.  Instead, what we got was dull and old, uninspired and over-rehearsed, lacking the emotion necessary to create a unique spark.  Its name cast and possible potential might keep it off the bottom of most lists, but that might be exactly where it belongs.