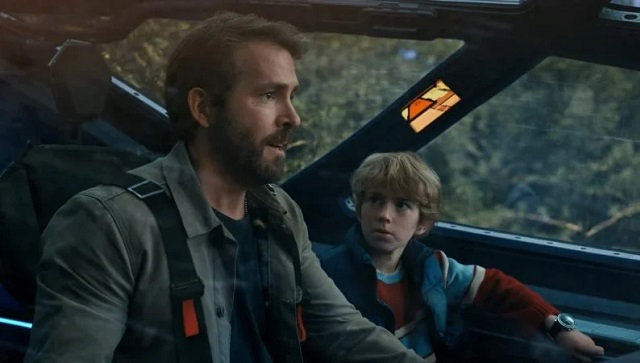 The Adam Project is an adorable reshaping of all the tales we heard when we were young, when the 80s & 90s rolled out sci-fi flicks mixed with coming of age stories and we ate them up like candy.  It’s also a vehicle for Deadpool/Reynolds-style comedy, made slightly younger, and brought to the homes of more audience members.  Unfortunately, it also comes with its problems, but the lovable attitude of its storytelling is enough to overcome those silly issues and let us enjoy what is, at its core, a heartfelt drama wrapped in the arms of a fun & fantastic time-bend.  That’s a lot, I know, but Adam Project is never too much; it’s pretty simple & pretty fun.

It’s the present day, and Adam is having trouble.  His father died a year ago, after being fairly distant with his scientific work, and bullies are giving him problems at school; Adam’s pretty small and awful mouthy.  He’s becoming drifting away from her mother, he’s losing hope, and his future does not look bright, but then something strange happens; his future comes to pay him a visit.  Grownup pilot Adam, from 30 years ahead, has come back in time to fix something that went wrong with the world, with the timeline, with his own life; it’s complicated.  But both Adams will have to come to terms with their own issues if they’re going to work together and save the universe, one wormhole entry at a time.

First off, you better like Ryan Reynolds.  This is basically Ryan being Ryan, but also a little version of Ryan being Ryan too, and that back-and-forth banter will either delight you or get on your nerves something fierce.  I happen to love his weird wit, so it was 2x the fun, and made for a great base for the story of the film.  And the message is real, there’s actual heart here, and touching moments; I actually welled up once, when Mark Ruffalo absolutely stole the show.  But there are issues as well, mainly the sci-fi action, which is sometimes bad and always terribly overseen by a disastrous Keener, who could not have been worse.  I hated her character and that arc, it dragged everything down, but thankfully somehow didn’t dominate.  What took control was our love for old movies and how well they were represented here: Back to the Future, Guardians of the Galaxy, ET, Shazam, you name it, everything young and space and growing up and adventure.  If you’re looking for entertainment, this is it, and it’s well-rounded enough to hold up when the going gets tough.  This is not a perfect picture, but for one of the first big releases of 2022, I’d say we’re off on the right foot.