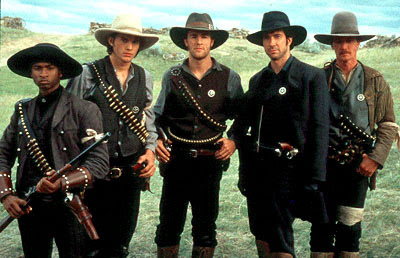 Although not a highly recognizable name, most movie-watchers have seen a Steve Miner film. Some of his cinematic gems include House, Halloween: H20, and Lake Placid. After filming Texas Rangers, Miner took a seven year break from film directing. His return to the screen was with 2008’s Private Valentine: Blonde & Dangerous, starring Jessica Simpson. In hind sight, I’m not sure why I willingly watched one of his movies.
In Texas Rangers, McDermott (The Practice) stars as Leander McNelly, a real-life Ranger, who attempts to revive the Rangers in south Texas and wipe out a gang of Mexican bandits led by Molina (Frida, Spider-Man 2). Among his young recruits are Van Der Beek (Dawson’s Creek) and Kutcher (That ’70s Show). The untrained boys learn quickly what it means to be the law in a lawless west, as they travel down the Rio Grande is search of adventure.

As it turns out, the combination of Steve Miner and Ashton Kutcher is as bad as it sounds. Leaving no western cliche unused, Miner subjected the audience to an hour and a half of mindless lines like, “Right is on our side!”, and, “I don’t deserve to wear this star!” Even more horrific than the dialogue were the cameos: Tom Skerritt as the grizzled ranch owner, Randy Travis as the gun-slinging sergeant, and, strangely enough, Usher as the scout who knows he can be so much more.

This movie could not have been much worse. Cheesy dialogue, clip after clip of men loading pistols, terrible acting by all involved, and gun fights in which every participant runs around aimlessly shooting guns over their heads. There were, literally, no redeeming qualities to latch onto. Not only is it a poor attempt at a western, Texas Rangers is a poor attempt at a movie.

Oddly enough, your review has actually made me WANT to watch this movie. I need to see how bad it really is.

Spare your mind! Don’t do it!