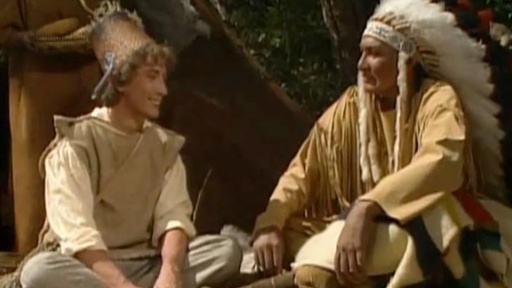 Johnny Appleseed might be the strangest hour of made-for-TV short cinema that you’re ever likely to watch.  Or, more accurately, one of the nine strangest.  But, in the words of Inigo Montoya, “Le’ me ‘splain.”  During the mid-80s there was a television “show” called Tall Tales & Legends, often hosted by Shelley Duvall.  There were nine episodes in all, each one a comedy taking up an hour-long time slot devoted to an American legend or folktale.  Pecos Bill, John Henry, Davey Crockett, Annie Oakley; heroes & figures from bygone days.  The Johnny Appleseed segment, which I stumbled across at my local library, was directed by none other than Christopher Guest, a man know for his mockumentaries and his six-fingered persona in The Princess Bride, hence the earlier reference.  In fact, many big names grace this completely outlandish & little-seen mini-film, making it a very odd hour indeed.

Johnny was always different, never fitting in to his family’s view of what a young man should be.  He loved sleeping outdoors, talking to the animals, and above all, eating apples.  So when he was old enough, instead of going off to school or learning a craft, John Chapman took to the paths of the forest, hoping to find his true calling along the way.  His love of apples led him to his unique occupation; planting apple orchards.  Not stopping there, Johnny would also teach trappers & traders how to plant their own food, how to raise crops, and how to be self-sufficient.  Well, this didn’t set well with Jack Smith, the big man of Smithville, who wanted things to stay the way they were, with him in charge.  So Johnny would have to leave town or stick to his guns, or apples as it were, making a decision that would set the course of his life.

Living in Ohio, we were taught at a young age the tales of Johnny Appleseed, a bit of fact mixed in with a bunch of fiction, no doubt.  But it’s a fun legend, a simple story, and it was nice to see it on the screen here.  However, the delivery of that story is much more comical than it is informational, a goofy movie that I wish I had seen as a kid and that my kids enjoyed thoroughly.  My favorite part was seeing famous actors in what really amounts to a skit, pretending to be pioneers with very little effort put in.  Short, Reiner, Ringwald, Lewis Arquette & Michael McKean of Christopher Guest’s crew, Alan Autry from The Dukes of Hazzard, In the Heat of the Night, & others; laughing at the cast’s exploits is where the fun lies.  It’s a very silly movie, one that can barely be called such, but a enjoyable piece of time capsule culture captured forever for our entertainment.