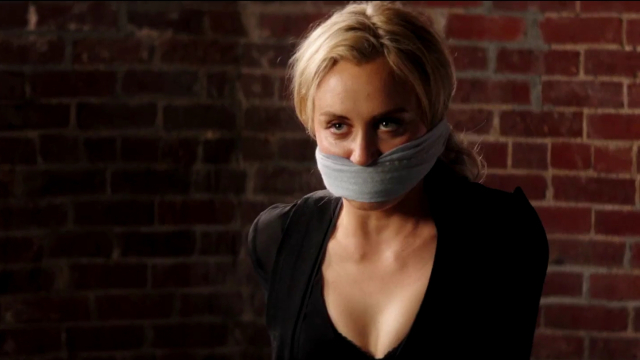 Other than the smash success that is Orange Is the New Black, Taylor Schilling is a relative newbie to the industry.  She was in Argo apparently, although I have no memory of her, and she was quite good in The Overnight, a wacky, indie rom/com that will make you blush and beg for more.  But that’s about it, and that’s also pretty shocking.  She’s an incredible actress, obviously her arrow is pointed up, and where she goes from here is anyone’s guess.  Before she perhaps reaches super-stardom, she makes a pit stop in this odd, low-budget comedy.  Take Me isn’t the best, it isn’t the worst, but it’s a movie worth watching not just as a Schilling time capsule when we’re 20 years down the road, but also as stand-alone, crack-you-up, keep-you-on-your-toes kind of funny flick, something that you won’t regret watching.

Ray Moody runs a very unusual kind of business, something you might say that he has rather cornered the market on.  He specialized in a therapy of a kind, a wake up call for those looking to be shocked out of their addictions or their mundane daily lives.  Ray offers an odd kind of service, basically a kidnapping that you pay for in advance.  Sign a contract, get taken, stay tied up in a basement for 8 hours, and leave cured.  Some folks just do it for kicks, some to kick a habit, but they mostly leave happy, and Ray is happy to help.  Times are tough though, there isn’t an incredible demand for his, umm, profession, so when a beautiful woman asks to be abducted for an entire weekend and says that she’ll pay thousands, Ray jumps at the chance.  But he’s about to go in over his head and realize that perhaps people who want to be kidnapped aren’t the most level-headed group that you could work with.

Taylor Schilling is just delightful; strangely and sexually and undefinably delightful, but delightful all the same.  She’s a talented actress who I’m happy that America found & fell in love with, and I hope we see much more of her in the years to come.  Her character is so insane, but so much fun, and she pulls it off perfectly.  Pat Healy, meanwhile, is an actor who’s been around forever, has never blossomed into something amazing, but is now trying his hand at writing/directing as a way to expand his arsenal.  He’s wonderful as Ray, the pair of leads working excellently together, and the story flows nicely from start to finish with nary a bump.  It’s strange, it’s fun, it’s goofy, it’s bloody, it makes no sense, and yet it’s bizarrely believable; have yourself a good time.