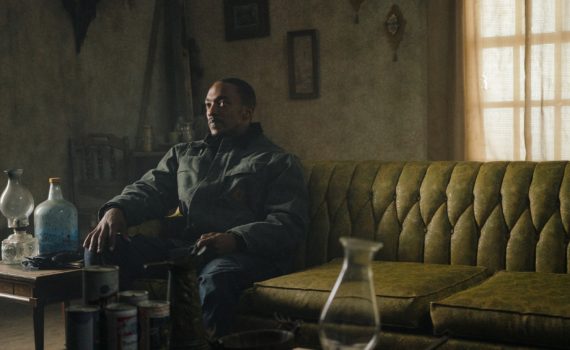 Benson & Moordead created The Endless, another time-warping drama, but this time around, with Synchronic, they were well-known enough to earn themselves a real budget, so they were able to cast real actors as the leads, not just themselves because they couldn’t pay anyone else.  That extra talent went a long way, and made this film more professional, more smooth, and ultimately better.  Synchronic is time travel sci-fi, a dark look at family, and a sobering experience with death, all wrapped into one surprisingly strong piece of craftsmanship that works wonderfully on a ton of different levels.

Steve & Dennis are a pair of best friends who went to school together, and now are paramedics on the same team, rolling around New Orleans after dark, saving lives and rewarding themselves by partying too hard.  But what they haven’t tried is a new synthetic “designer drug” called Synchronic, which supposedly trips you so hard that you sustain insane injuries or disappear completely.  When both men are faced with separate personal tragedies, their lives become interwoven with the drug, and Steve must step outside himself into a world he doesn’t understand in order to save his best friend’s family before it’s destroyed beyond repair.

I’m gonna give you the benefit of the doubt and assume you know that Mackie & Dornan are much better actors than their famous roles, that they have a lot to offer, and they showcase that here immediately, just in case you didn’t.  The acting in this film is spot on; it’s deep, it’s dark, it’s multi-leveled, it’s boldly blunt and suddenly soft.  These men throw themselves into these roles, and when the story starts to get wacky (because it is sci-fi, after all), they have the ability to move us through the muck to the other side where the plot is cleaner.  Family, friends, death, the purpose of life; it’s all laid on the table here, with a “gimmick” to make it fun, to keep our attention, but with true purpose to drive the action when other features would have failed.  Hats off to all involved; I think this filmmaking team has a bright future.