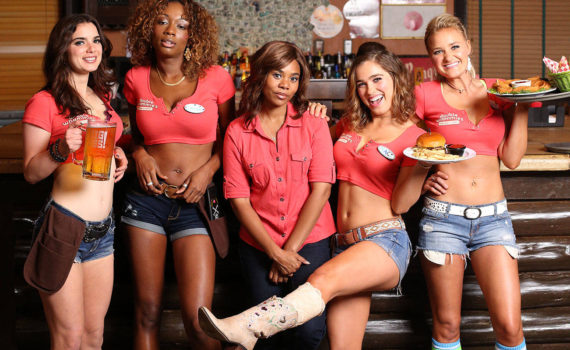 Support the Girls is a prime example of message over material, since it definitely has something to say, but has absolutely no clue how to say it.  Bujalski’s only other non-indie feature, Results, has the same feel; as if he had a great idea, convinced some known actors to jump on board, and then couldn’t do anything to see his vision realized.  It’s possible that there’s some talent there, maybe he needs a directing partner, who knows, but it’s also possible that he’s only a writer, not a director, because so far he hasn’t been able to bring anything he’s thought up to life.  Support the Girls is even a step down from Results, a worse realization of an interesting plot, and it will perhaps soon be time to cross this filmmaker off our collective watch list.  His next project is the re-make of Lady and the Tramp, writing not directing, which may be the very last straw.

Lisa is the manager of a sports bar restaurant in Texas called Double Whammies, and she loves her job.  Well, she loves the young girls she works with anyway, helping them when she can, giving them advice when they want it, generally being a den mother to a whole tribe of ladies who need to waitress to make money but also need protected from the assholes who walk in the door.  Double Whammies is like Hooters; yeah they have beer and sports, but men come specifically for the Daisy Dukes and the belly shirts, which is how the place turns a profit, so I guess you get what you ask for.  Lisa isn’t interested in that though, she wants these girls to be provided for when they leave at the end of their shift, wants this weird family to help each other through whatever might come next.  Over the course of a very stressful day, that bond will be stretched to the limit, and Lisa’s positive outlook will begin to darken.

Again, idea over delivery, I can’t emphasize that enough, because the plot is a clever one, the moral is right there for us to see, and the film features strong women exhibiting that in a variety of ways, so hats off to all that success.  But the movie still needs to work as a movie, and that’s where the train jumps the tracks.  Support the Girls brings some of the worst acting you’ll ever see into our living rooms, and for that I’ll never quite forgive it.  Hall is awful, like a parent in their kid’s high school play, and every single one of the Whammy Girls is terrible, like people pulled off the street, with the exception of HLR, who I think has a natural spark.  But god the rest didn’t, the pace dragged, and there wasn’t enough music; scenes were done as static skits with no real mood other than drama club chic.  I can’t believe other critics are so high on this film; I found it boring, poorly-delivered, terribly-acted, and amateurish, leaving me wishing that it have never been attempted so I never would have been subjected to it.