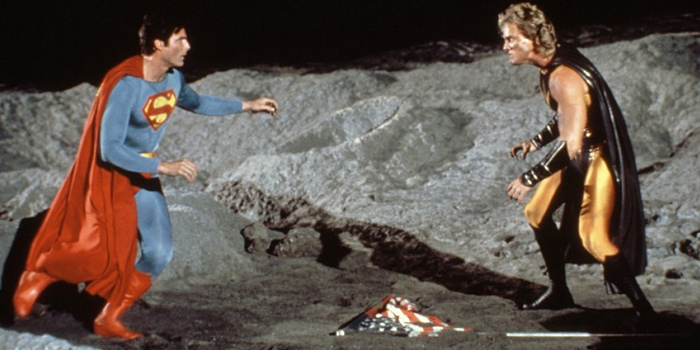 In the fourth, Superman is asked to become political, as the world enters a nuclear arms race and faces possibly annihilation.  He doesn’t want to take sides, but he also understands that he has to help in some way, that humanity isn’t ready to go it alone quite yet.  So Superman gathers up all the nuclear weapons and hurls them into the Sun, making Earth less likely to be destroyed; end of story.  But not quite, because tricky Lex Luthor is back again, and this time he’s hidden something in one of the bombs that has now been obliterated that will cause Superman some headaches.  Out of the ashes comes a new indestructible being, Nuclear Man, with the power of a star, and loyal to the evil Luthor.  He and Superman will duel, while Clark falls in love with another lovely lady and tries to figure out once more how to balance a social life with being the champion of an entire planet.

Sidney Furie might only have ever directed terrible movies, like 50 of them, it’s insane, but at least this much can be said for him; he saved Superman.  After Superman III, I’m not sure the world could have taken another direct hit, another film that was as much an insult to taste.  But he swooped in, returned the series to a style it had once sported, and left us all with a good taste in our mouths.  Hackman back as Lex, Kidder back as Lois, the theme music blaring, the same emotions stirred, a way shorter run time to speed things toward the climax; Furie knew what he was doing and did it well.  Now, that’s not saying Superman IV didn’t have its issues.  It’s over-the-top, fairly dumb, and showcases some world-class, F-grade acting; Mariel Hemingway and John Cryer are especially bad.  But, in the end, the film gets by on its own camp, going so bonkers that it starts to be pretty fun, even while we know it’s no good.  So ends the Superman quadrilogy, and the next time I return to it my kids will be a little older and ready to share in the experience with me.  It won’t have changed though, and that’s the magical thing about watching movies, they will be there for you forever, whenever you might need them.