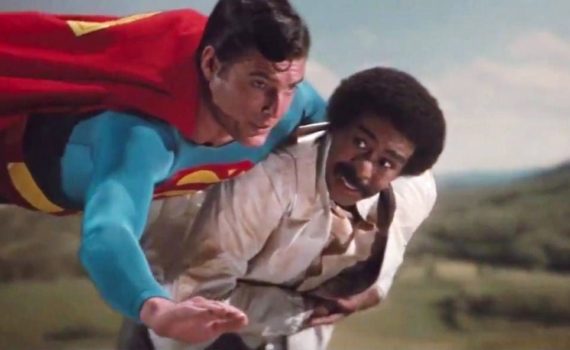 In the third, Superman has made Lois forget about his true identity and their romance, knowing that the world still needs a super hero on the job 24/7, with no attachments of the personal kind.  But that doesn’t stop Clark, when Lois goes on an extended trip to scoop a story, from accidentally falling in love again while he’s on location developing his own article about small town life.  He attends his high school reunion and reunites with Lana Lang, his old crush, who begins to crush back just as hard.  But the world’s troubles won’t wait for a romantic picnic, Superman is needed, and more than ever.  Super computer genius Gus Gorman has teamed up with the wealthy and evil Ross Webster, who first wants computers to take control of the coffee crop, then the oil industry, and then the whole world.  To stop Superman from interfering, Gus gives Supes synthetic kryptonite, that doesn’t zap his power, but splits him into two distinct versions of himself, Jekyll vs Hyde, good vs evil, with the fate of Earth balanced between who wins the duel.

The third installment is by far the worst in the franchise, and comes close to one of the worst, dumbest, weakest, and most embarrassing movies I have ever seen.  It’s saved by the series, which I already enjoy, so I can’t exactly hate anything that falls under the umbrella, but boy does Superman III ever try its best to get us to despise it.  I’m not really sure where to start; the direction falling off, Superman’s evil twin who has a 5 o’clock shadow to show us that he’s a bad boy, the removal of the Lois love story, the absence of Lex Luthor, Richard Pryor not funny in any way, which is a complete shock.  Everyone’s acting takes a nosedive, like they all agreed to suck, and joke after joke fails to work, like the writer was purposefully trying to make the film tank.  I did like Annette O’Toole as Lana, and I did like that Margot Kidder was absent, but the computer stuff is plain ridiculous, especially looking back on the era 36 years later, and having two Supermen is a shark jump unlike any other.  I wish this movie didn’t exist, because it sullies the good name of the series.