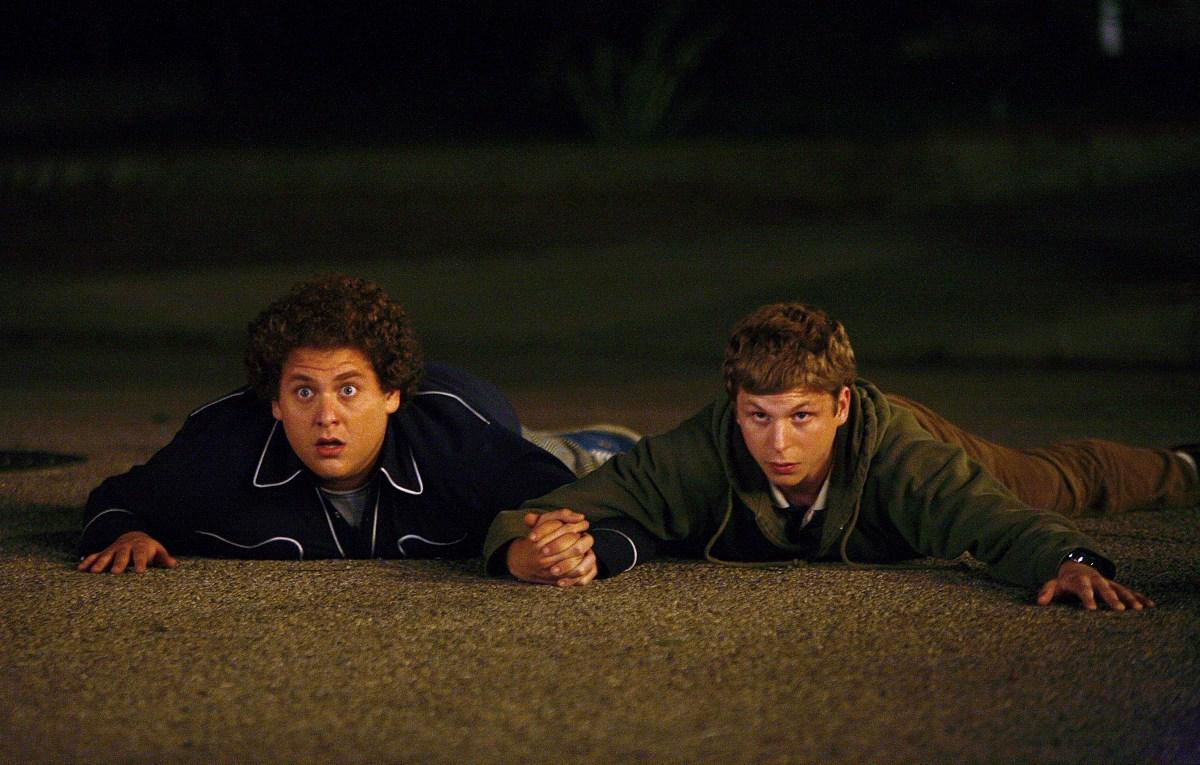 From top to bottom, from Jules to McLovin, Superbad is an iconic comedy to put most other iconic comedies to shame.  It’s one giant, fucked-up quote-fest, and the laughs never stop, even if the main characters are doing something as mundane as shopping for pants or as insane as grinding with a girl on her period.  Each line is written to be hilariously wrong, so that you never know what to expect or what idiocy might happen next.  Seth Rogen and Evan Goldberg wrote the film together based on their experiences growing up, and that must have been one wild time, because the movie never slows down.  Superbad is a coming-of-age tale like no other, a raunchy comedy that’s still original in content, one of the undoubted best in its genre.

Seth & Evan have been best friends since they were eight, and now they are an inseparable high school pair.  Well, they got into different colleges, so that will tear them asunder, and it will put a strain on their relationship until then, but they have two weeks left of school and an entire summer to be together; they have their hearts set on making them the best days yet.  Seth is crushing on Jules, Evan is in love with Becca, both want to get with them before the opportunity is missed, before college chicks start expecting more than dweeby virgins.  Jules is throwing an end-of-the-year party, and Seth knows that this is his chance.  With their goofy friend Fogell, the plan is to score a fake ID, get some liquor, show up to the party as heroes, and get laid for the first time.  But you know what they say about best-laid plans, and Seth & Even being completely hapless dorks won’t help matters much.

I dare you not to love Superbad, I fucking dare you.  Yes, it’s juvenile at times, yes they talk about penises a lot, but that’s high school boys, that’s what they are, and this film, apart from being completely hilarious, captures that experience as well as any I’ve ever seen.  Seth & Evan as characters are obviously the writers putting themselves into the film, and you feel it the whole way through; this is what growing up as these two lovable morons was like.  This film was also a springboard: Jonah Hill, Michael Cera, Rogen & Goldberg as filmmakers, Emma Stone, Bill Hader has a nice role, Dave Franco makes an appearance.  It’s a great cast, and Rogen even writes a role for himself, one of the two cops that absolutely steal the show.  Their scenes with McLovin are genius, and Mintz-Plasse’s character is something that can not possibly ever be duplicated.  The film as a whole is untouchable, can’t be copied, stands the test of time because it isn’t too dated, and will always remain as one of my favorite all-time comedies.