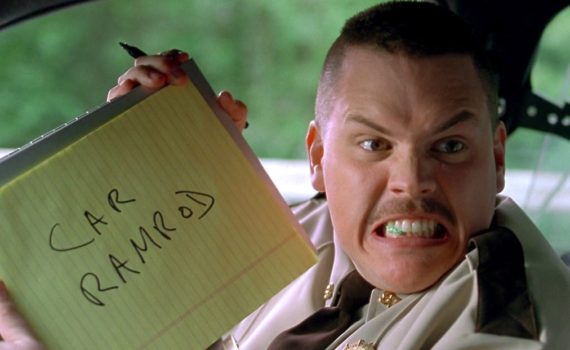 2001 was the year I graduated high school, so it was the perfect time for me to see and enjoy Super Troopers.  A dumber movie does not exist on the planet, but I still found it funny; I guess that’s what happens when you make a bunch of penis jokes for a 17-year-old guy.  But it becomes more awkward when you remember that the Broken Lizard comedy troupe weren’t all 17 when they made this movie, they were grown men who still thought chugging syrup was hilarious.  That’s weird, and the movie is weird, it’s all weird when you think about it too long, but I assume that’s the case with any raunchy, idiotic, hyper-“masculine” film, it gets more uncomfortable the more you put it into context.  So my advice when watching Super Troopers is don’t.

In Vermont, near the Canadian border, a team of Highway Patrolmen are about to have their station shut down, and it’s basically their own fault.  The state only has the budget for so many officers, and the local cops can police the highway just fine, so why keep an unnecessary branch open?  Also, this particular gang of misfits are always causing trouble, always pulling gags, and never consider themselves subject to the law.  Thorny, Rabbit, Mac, Foster, Farva; these idiots love their job and the brotherhood that they have formed, so they’ll do anything to save their station from being closed.  When drugs and a murder case cause some stir in their community, these super sleuths are on the case; now if they can only stop from literally shooting themselves in the foot.

Dumb and Dumber meets Reno 911 might be a good way to describe this movie if you’ve never seen it, and if you missed it when it first came out I’m not sure I can recommend it to you now.  It’s chalked full of one-liners and immortal quotes: Car Ramrod, meow what’s so funny, chickenfucker, who wants a mustache ride.  The cameos are cool: Lynda Carter, Brian Cox, Jim Gaffigan.  And it’s really funny in a very certain way, a way that perhaps only movie masochists can enjoy.  But god is it dumb, and in no way are these fellas actors.  They’re just themselves, this film was a hit for some unfathomable reason, they really aren’t that talented, and although they tried to make more comedies, nothing ever quite worked out the same.  This is something you can revisit for some laughs and because it’s an odd kind of cult classic, but I can’t think of anyone I’d show it to for the first time; I wouldn’t want them to see me chuckle at something so bad and wrong.