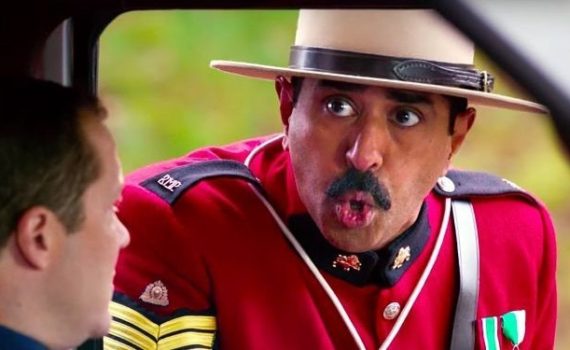 Seventeen years after the original Super Troopers, the long awaited sequel is here.  I was 17 when the first movie came out, so I’ve doubled in age but I’m not sure about maturity; I guess Super Troopers 2 is here to help me find out.  This comedy troupe is known for their idiotic humor, for their insensitive jokes, for their obsession with drugs and penises and guns and silly voices.  I found that funny when I was younger, they became a bit of a cult sensation, but I was nervous about how their style would translate to modern times.  After all, you could call Broken Lizard racist and sexist and tasteless, and I don’t think you would hear many arguments.  But it might be their awareness of these things that gives them a pass, their ability to make fun of others while making themselves look like fools in the process.  I don’t know, these guys don’t make sense, neither do their movies, but we somehow love them all the same.

Years after their station was shut down and they became local Spurbury, Vermont cops, the gang is back together once more for another mission.  They were all fired from the force for an incident involving Fred Savage, but they’re being given a second chance, only because their talents are needed along the border once more.  Apparently the maps of the US and of Canada were drawn incorrectly, a chunk of land now coming over to the States, a police force needed to make sure the transition goes smoothly.  So our boys are headed up to meet the Mounties, and to lay down American law in loon country.  But, wouldn’t you know it, drugs are crime are popping up where they are least expected, and it’s up to the Troopers to crack the case, all while avoiding bears, figuring out the metric system, and making peace with the natives; good luck guys, and have fun, eh? The Canadian jokes are out of goddam control in this movie, so you had better be prepared, better find them funny, and better not bring your friends from up north.  On a serious note, before we dive in, I wonder how a French Canadian would feel about this film; it has the potential to be extremely offensive.  Thinking about that makes me feel guilty for laughing at the jokes, but I have to assume that all was done in good humor.  I have to hope that everyone knows that these guys are morons, that they make fun of themselves more than anyone else, that their jokes might be tasteless but they aren’t meant to be harmful, and that those who they’re poking at can laugh right along with us because it’s all so ridiculous.  If there was some solid complaint from Canadians or from women or from whoever, I’d have to listen, because I see now the potential for insensitivity in a way I couldn’t when I was a teenager.  I’d want to be understanding of that if it was a problem, but for now I’ll just enjoy the show and assume that it’s equal parts couthless and toothless.

Anyway, on to the movie, which is exactly what you would expect.  If you are a fan of the first, you will enjoy the second; the guys bring just enough back with just enough new material that they’ll have you cracking up all over again, if not exactly quoting the lines this time around.  You get Farva the tool, Thorny the Mexican, Mac the maniac, Rabbit the goofy rookie, and Foster the relative straight man.  You also get some more cameos from some non-Lizards: Brian Cox, Lynda Carter, Will Sasso, Rob Lowe, Fred Savage, Seann William Scott, Clifton Collins Jr, Damon Wayans Jr, Jim Gaffigan, and others.  Lynda Carter was a bit weird; she’s had a ton of plastic surgery, and I think even her voice has been altered, it was much higher than it should be.  But anyway, Broken Lizard delivers the comedy you’re ready for and them some.  There are more puns, which weren’t that funny, and the beginning scene it so stupid I was afraid that the entire feature would be a giant, shitty dud.  But then the fan service started, everyone make fun of Canadians, the metric jokes got me every time, Rob Lowe wove his magic, and everything worked out.  It obviously can’t be quite as good as the first, but Super Troopers 2 is exactly the kind of film you and your friends who laughed right along with you seventeen years ago should see at least once.  But don’t take anyone who isn’t already on board; this isn’t the kind of thing you want them to know that you watch and enjoy.