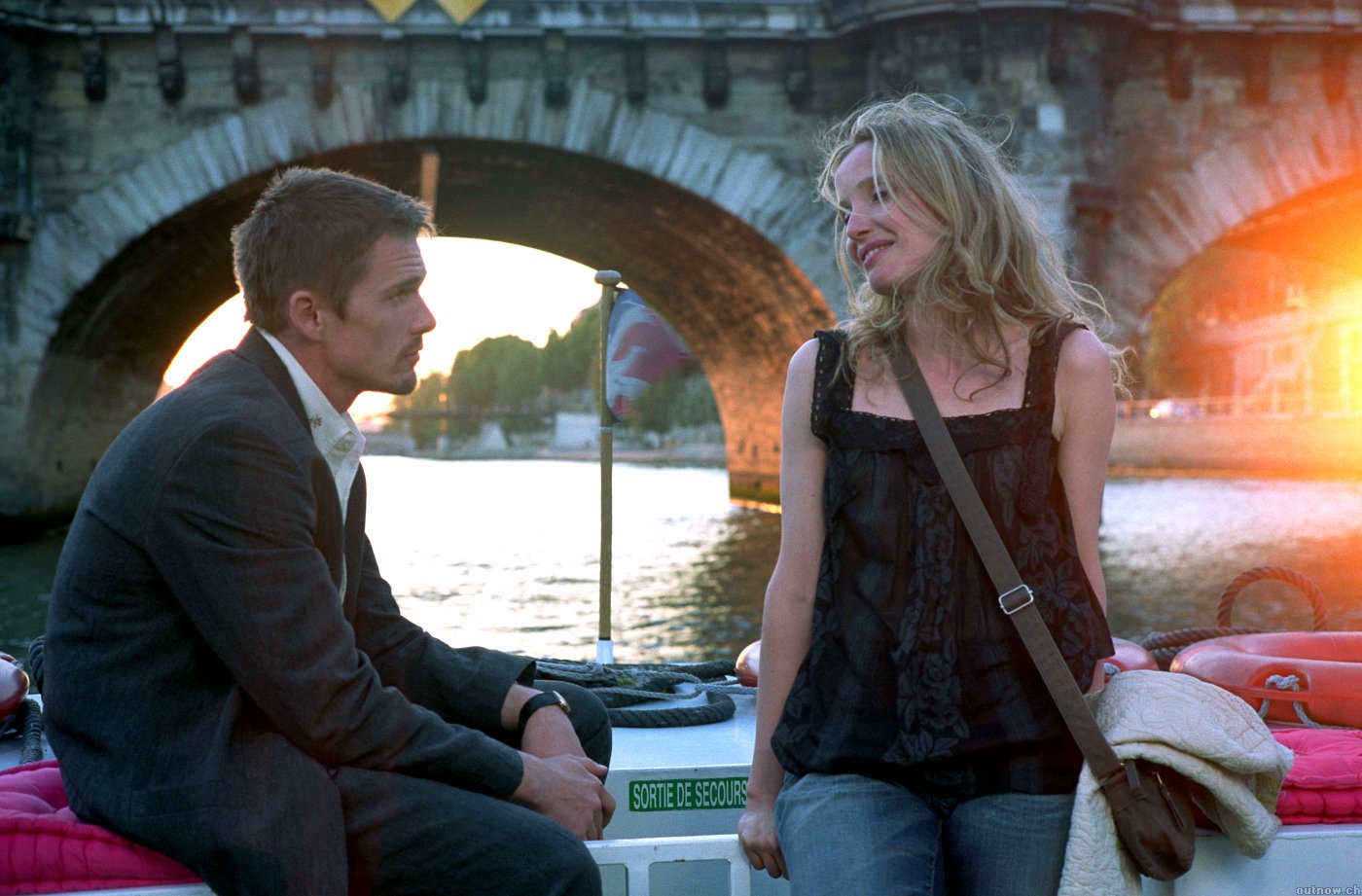 Before Sunset is the follow-up film to Richard Linklater’s Before Sunrise, the pair beginning the chronicle of a great love affair between an overly analytical American man and an overly dramatic French woman.  If that sounds cliche, well, perhaps it is, but Linklater is able to take a standard romantic plot and draw it out into something much deeper, a character study instead of a situational love comedy.  Before Sunrise has become a classic romance, a 90s time capsule, and a film to be applauded, as it stands the test of time and spawned this wonderful series of movies.  Before Sunset is even better; a continuation of the story but from a more grown-up perspective, a reminder that life is unpredictable but that love is never too far away.

Nine years after they met in Vienna, Jesse and Celine run into each other in Paris.  Actually, Jesse is a successful writer now, has written a novel about his encounter with Celine, and she comes to a book signing in her home town in order to see him.  The two reunite during a walk around the city before Jesse has to catch a plane; the story of the couple’s life, I suppose.  But will they be able to leave each other again, after so much time apart?  They had planned to meet up after that first, fateful meeting, but failed to do so, allowing their lives to move down different paths away from one another.  But love is still in the air, Jesse & Celine haven’t forgotten that feeling, and they may not be able to go back to their established lives ever again.

This second installment is my favorite, impressing me with melancholy and hope in turns, allowing that love is imperfect but that it’s also worth the wait.  Before Sunset is beyond romantic, the way these two feel when they are back together after so many years, the way they can jump back into the conversation like they never stopped.  As they walk about Paris, we learn what they’ve been doing over the last decade, what choices they have made, and how they regret some of the most impactful ones.  It’s so sad and yet so beautiful, this saga, and I’m not sure I’ve ever rooted for a couple more than I root for Jesse & Celine.  Perhaps it’s because I’m also in my 30s, but I related to this film most acutely, understood how the characters’ philosophies had changed from their 20s, saw life the way they were seeing it, felt the passion they had for each other at this point in their lives.  Before Sunset is a wonderful, simple, short, dialogue-driven film that makes a heavy impact and should make your list.