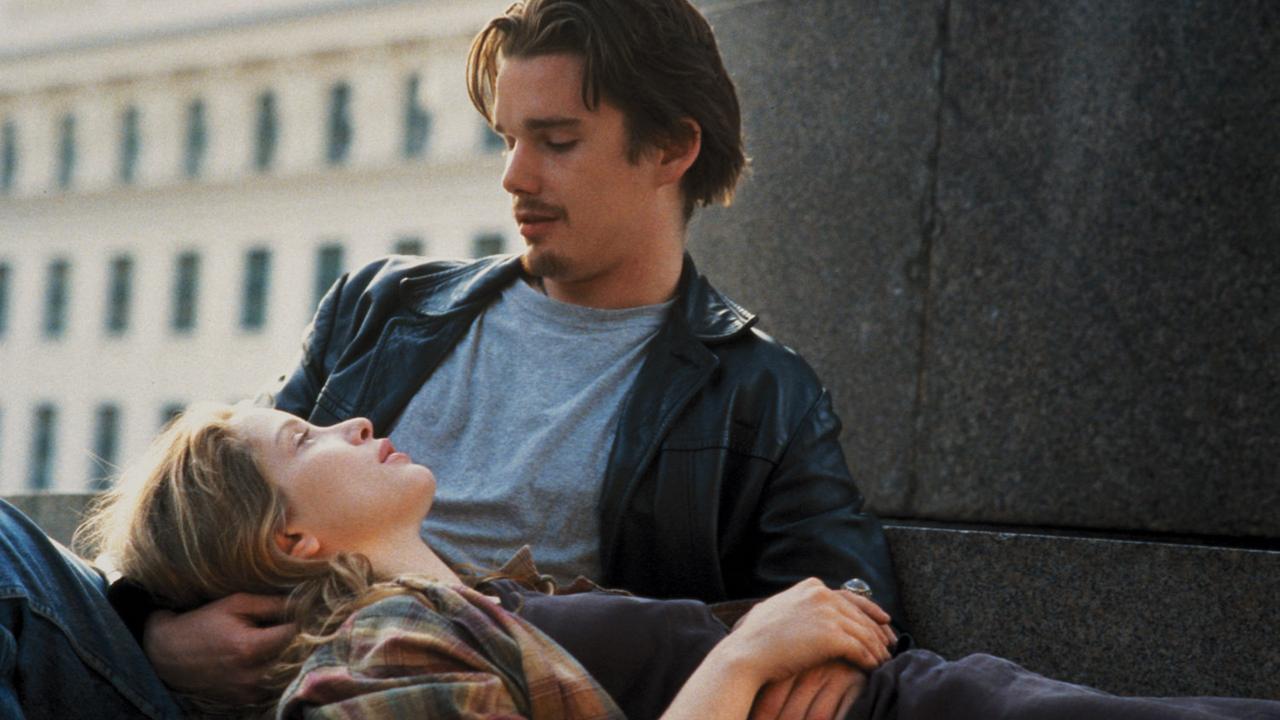 Richard Linklater’s magnum opus begins with Before Sunrise, the first of three films that chronicle the romance between two unlikely lost souls, Jesse & Celine.  As you probably know if you’re reading this review and have any previous knowledge of this film, Linklater would direct a trio of films all focused on the same pair, spacing them out with nine years in between, filling us in on what’s been going on in these characters’ lives in the meanwhile.  Linklater loves to play with time and to let real time lead his stories; the best example of that is Boyhood, a phenomenal film, but often critiqued as a one-trick pony.  I don’t think you can call Before Sunrise that, if anything it’s pure character-driven drama with little to no actual events, which isn’t to its discredit; that’s what makes it magical.

Jesse is on a train bound for Vienna after breaking up with his girlfriend in Madrid.  Celine is on the same train after visiting her grandmother in Budapest.  The two randomly sit next to each other and share a laugh, opening the door for one of the most romantic love affairs of the century.  After a chat and an obvious connection, Jesse proposes a wild idea; that Celine, who is French and is headed back to Paris, gets off the train with him in Vienna.  He has the night to waste before he catches a flight back to America in the morning and no money for a hotel room.  He wants to walk European streets one more time before he goes, and a beautiful woman at his side would be a wonderful bonus.  It might be insane, but Celine agrees to join him, and the two begin a memorable evening together, one of walking & talking & not much else, but one that they will never forget.

I don’t like to criticize directors for creating a gimmick that works.  You could look at it as Linklater manipulating the audience into thinking his films are better than they are by using a trick, or you could look at it as Linklater utilizing an original idea that results in an excellent film.  I choose the latter, and I enjoy his projects because of my viewpoint.  But, to cap this conversation off, it wouldn’t work without good dialogue, acting, and chemistry, all of which appear in abundance in this film.  Before Sunrise is romantic beyond description, and really makes use of every moment it is given to tell us a little more about love and life.  Sometimes the conversation gets a little pretentious, but hey it’s the 90s, these are 20-somethings trying to impress each other, they’re bound to get a little existential.  The hair, the clothes, the verbage; it’s so dated, but it a wonderful way, and Linklater catches the vibe perfectly, especially when you remember that he’ll do three look-ins, all from different decades.  The first in this series is more than a solid start, it’s a quality movie on its own, and should be seen by anyone who wants to imagine a world in which love does conquer all.