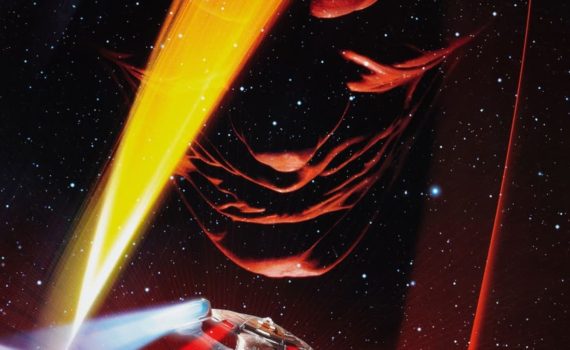 If you didn’t know better, you could convince yourself that, while watching Star Trek: Insurrection, you were just watching a two-part episode on TV; there is no difference between this film and the standard, silly, entertaining plots of the beloved television show.  That’s both a good and a bad thing, because these movies have been worse, like the totally ridiculous Generations, and they have been better, like the theatrical First Contact.  Insurrection falls somewhere in the middle, but it’s definitely an enjoyable experience, if what you were looking for was more TNG action and less of a movie-going experience.

The crew of the Enterprise are surprised to hear that Commander Data has lost control of his impulses while on a mission on a far planet; he blew the Federation’s cover in their attempt to watch a civilization covertly, he attacks the observation team, and the result is that they are taken “prisoner” by the peaceful people there, Data acting as a feral watchdog who won’t let anyone come or go.  Why has he malfunctioned, what secrets does this civilization possess, and why is the Federation so interested?  Captain Picard and his team will attempt to uncover all mysteries while rescuing their friend from danger and keeping the political landscape of the galaxy in its delicate balance.

Frakes scores again, and he really could be considered the savior of the film franchise, because things were going very badly at first, and by all accounts they go very badly when he steps away at the last as well.  But these two movies in the middle are so much fun, so Star Trek, give fans everything they want to see, and he deserves a ton of credit for righting the ship.  This story really is no better or worse than a two-part episode of the show, with the exact same dilemmas and outcomes, the same dynamics and adventures.  It’s so silly, of course, but if you love the show you’ll love this film; it’s just an extension, not a theatrical experiment.  Data returns to form by leaving his “emotion chip” behind and that’s a great choice; Data is one of the best characters just the way he is.  And Picard has all the answers, everyone pitches in, there’s a lovely ending; it’s all I could have asked for in a very safe, comfortable, in-no-way-groundbreaking sort of format.