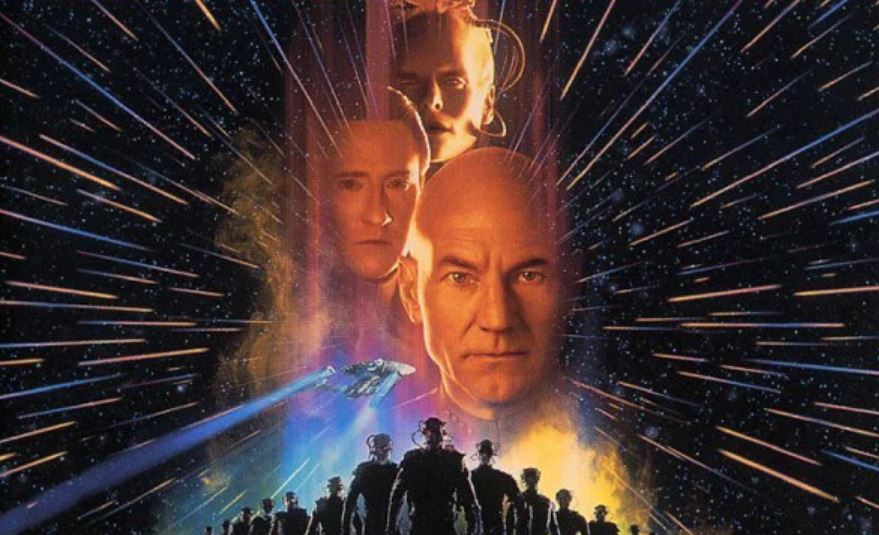 If Star Trek: Generations wasn’t very good, I suppose we can forgive it; after all, Next Generation had just ended, they were trying to bridge the gap between the famous Kirk/Spock films & something new, the director was an odd choice, and things went a little haywire, we understand.  But First Contact is the good answer to the awkward question, the righting of wrongs, and the Star Trek we all wanted to see.  Frakes takes command, we go back to our history, and the ship is righted, so to speak.  First Contact is a much better attempt to make the TV series into a movie, which can’t have been easy, but succeeds here.

The Enterprise E is now in operation, Picard’s crew have new uniforms, Worf is now in command of a vessel himself, and things are ready to get back on track, until an old enemy resurfaces and attempts worlds domination again; the Borg are back in town.  Picard knows them well, he was one of them for a time, and when the battle strategy against them goes poorly, the Enterprise swoops in to save the day.  And it looks like the day is won, except for a strange sphere that nears Earth and seems to immediately turn it into a Borg planet.  Our heroes follow, and what they discover is a sinister plot; go back in time, stop humans from making first contact during the first warp flight, isolate the factions that survived World World III, and conquer them before they are even aware.  It’s up to Picard & Co. to save the day, starting with keeping the inaugural flight on track, and ending with a war against the Borg that will put Picard’s & Data’s very lives in jeopardy.

Much, much, much better.  Frakes makes this film feel like a two-part episode, nothing more, and that’s exactly what fans of the show wanted from these films, the continuation of the story after a time away, more adventure from our friends in the way we’ve enjoyed countless times before.  This is entertainment delivered to us the way we wanted it, and that’s not always a bad thing, playing down to your audience; sometimes fans deserve to be treated, and I think Star Trek fans have earned that treat.  Stewart’s personal battles are great here, Data’s as well, both much better told than in the first film, and if we don’t get much from the other characters, well, are they really very good actors anyway?  All the gang are back, we get James Cromwell & Alfre Woodard, the Borg are ultra-evil enemies, enough time has passed that there are some cool changes; all is right in the universe once again.  Even if we peak here, and Insurrection & Nemesis aren’t any good, at least we had this one.