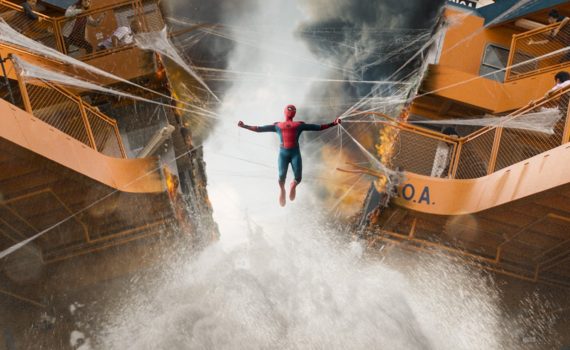 I hate to be labelled as a contrarian, but I didn’t like Spider-Man: Homecoming as much as the majority of America did, and I’ll try my best over the course of this review to explain why.  So you know, in the past I would have claimed that I didn’t like “comic book movies”, that they were poorly-made and far too focused on money over quality.  Through the years, I’ve learned to enjoy the genre for what it is, and Marvel movies specifically have won me over, partially because they are getting better and better.  The Avengers Universe is improving with each addition, and I especially appreciate the Captain America films (First Avenger, Winter Solider, Civil War), which are by far the best.  Perhaps because I am a reluctant fan, who has learned to be entertained by and to notice the solid details of these films, I was disappointed by the most recent effort.  Spider-Man is a step back from adult dramatics toward teenage action, which is exactly what I don’t want.

After joining the Avengers in a war between Tony Stark’s ideals and Steve Rogers’ independence, Peter Parker has returned to average, high school life.  Well, as average as life can be for a teenager who can stick to walls and basically act like a super-spider.  Peter wishes that he was a part of the hero team that seems to always save the day, but it’s judged that he’s not quite old enough, that he needs to become a friendly, neighborhood Spider-Man first, that big things will come later.  But getting picked on at school would become a distant memory if he could just tell everyone that he’s a superhero, so it’s not easy to hide behind a quiz bowl/chemistry club facade.  Peter gets a chance to test his abilities when criminals begin using weapons with alien technology, sold to them by the Vulture, a man with a flight suit and a serious vendetta.  Spider-Man will have to save the day, whether he’s allowed out on school nights or not.

I want to start with the positives, because my critique of this film in no way means that I didn’t enjoy watching it.  First, Tom Holland is the perfect Peter Parker.  Let’s put Maguire and Garfield aside since this movie is a complete reboot, although I am partial to the Maguire films and would probably call them better if I was forced to.  Holland was a great addition to Civil War, so cool and so young, a breath of fresh air when it was needed most.  Ant-Man, on the other side of the fight, was the relief for that troupe, and both characters were smartly inserted and then taken away.  I can see Holland being a franchise guy, someone who grows with the role, even though he’s not actually as young as Peter is in the stories.  Secondly, the story was solid, it was believable, it never jumped the shark in way that I’m sure it could have if those in control had relaxed their grip on the reins for even a second.

But the lead driver, Watts, had little feature experience coming into this project, and you could tell.  He tried to let the Universe take itself where it wanted to go, but the film lacked a signature or an imprint, leaving it a bit unpolished.  Also, I didn’t enjoy most of the actors surrounding Holland, from Keaton, who I thought was so obviously bad I must be going mad since no one else saw it, to Favreau, who could not have done worse were he paid to obtain a Razzie.  But the biggest problem I had with this movie, and I understand that it won’t rub everyone the same way, is that it focused on younger audiences and so let down my morbid side.  The humor was fairly juvenile, the action wasn’t violent, the climax feels like a Saturday morning cartoon, and the general feel I got was that the filmmakers were going for a family affair rather than a war movie.  I get that, it’s fine, but it’s not what I wanted, and even though I know that Peter Parker is young I didn’t necessarily want his introduction to be.  I can’t get on board with those singing this film’s praises, I thought it was too flawed for that, though I will say that I was entertained the entire way and there’s no reason you can’t be too.