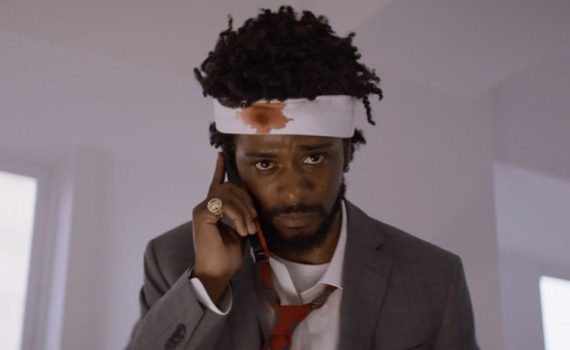 Terry Gilliam should be proud to pass the torch of insane cinema to Boots Riley, with the knowledge that it’s in good hands.  Gilliam had his run with Monty Python and with several bizarre masterpieces in the 80s and 90s, but he’s long since stopped producing anything spectacular, and it’s beyond time for him to give up the throne and to let a different, much more current director take over giving us deep meaning in the form of dystopia.  Sorry to Bother You is just that; a volume of commentary on modern society set in an alternate and ridiculous future, but one that we can still readily recognize as our own.  It’s a bonkers flick, will be dismissed by most, but if you can find the humor in the madness and the secrets within the subtext, something spectacular will be revealed, and you’ll turn off your DVD player changed.

Cassius Green knows that cash is green, but he also knows that he has none, and it’s time to get paid no matter what.  He’s living in his uncle’s garage, his car is a POS, and his girlfriend is about to leave him for something better; it’s time to get off his ass and into a manager’s office with a resume in hand.  His friend works at a telemarketer and they’ll hire anyone, so Cassius gets a job, but he’ll never sell products with his current attitude; he needs a drastic adjustment if he wants to make it big.  So he starts using his White Voice, becomes a Power Caller, and is on his way up the corporate ladder, abandoning his community and his values along the way.  When the CEO of a mega-corporation called Worry Free notices Cassius’ rise, he’ll have to make the ultimate decision between his greed and his humanity, which isn’t as easy as it sounds.

A Brazil for a new generation, Sorry to Bother You is also one of the absolute best films of the year, despite almost no notice or recognition.  It’s wacky to the point of distraction, but every daring choice was made for a specific reason, and I think they worked about every time.  I was worried when it started to strongly that it couldn’t finish the same way, but I was wrong; the story swerved a ton but never lost its true path.  Consumerism, racism, capitalism, greed, cultural appropriation; there are themes enough here for ten movies, but Riley wraps it all up so nicely you barely notice that your mind is about to burst with the truth.  Boots is a rapper, this is his first attempt at both writing and at directing, and he makes it look so easy, like all he had to do was splatter the paint and let his artists do the rest.  The cast was incredible; Stanfield is magic, Thompson is a natural, Hammer cracks me up, and even the supporting cast was great, which is fairly rare.  The music, the sets, the cloths, the odd futurism, the modern commentary, the casual coolness; it all works, it all shocks, and I’d watch it all again in a heartbeat.