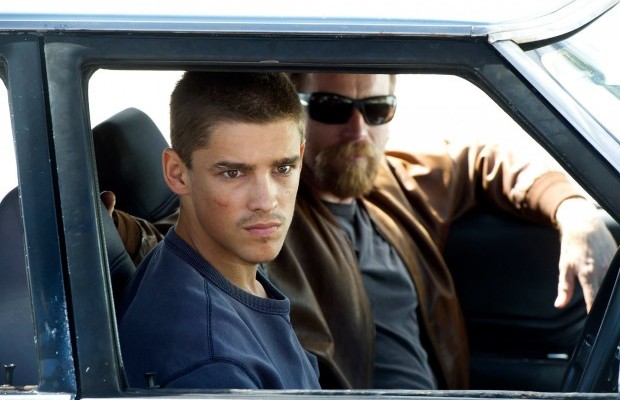 Brenton Thwaites seems to be making a habit of mediocre movies, or maybe he’s getting them all out of the way at the same time.  I’ve now watched him in four films released in 2014, and none were wonderful.  The Signal, Maleficent, The Giver, and now Son of a Gun; all movies that are fine but not at all spectacular.  And the same goes for Thwaites himself, at least at this point in his career.  He’s a good young actor, but not a terrific one yet, and his characters reflect that he’s not ready for the big show.  Son of a Gun exposes him as an unprepared actor in an OK film, someone who might get better with experience, but isn’t quite ready to support a drama on his own shoulders just yet.

As a young prisoner, JR is not prepared for life on the inside.  He quickly makes enemies and would quickly be destroyed, if it weren’t for the help of veteran criminal Brendan Lynch.  Taking of a fatherly role, Lynch promises JR protection right now if the boy will join his team on the outside.  This means contacting mob boss Sam once JR is released from jail, working to bust Lynch out, and then becoming his partner in crime.  And the crime in mind is a bold one.  Once out of prison, the team plan the robbing of a mine where brand new bars of gold are being produced, a theft that will make them instant millionaires.  But who can trust who, especially when the beautiful Tasha enters the picture and makes everything much more complicated.

Thwaites just isn’t there yet.  The beginning of the film is excellent, with Thwaites as the inexperienced convict and McGregor as the knowledgeable inmate.  They played well off of each other and that part of the plot flowed smoothly.  It was when they got out that things went downhill.  Thwaites was called upon to do more than he is capable of doing and Vikander, though a great actress, was asked to play a part that didn’t suit her at all.  McGregor became a backup character when he needed to be the lead, and the pace of the film fell apart as a result.  This was director Julius Avery’s first feature film and you could tell, as it never came together the way the first 20 minutes promised that it would.