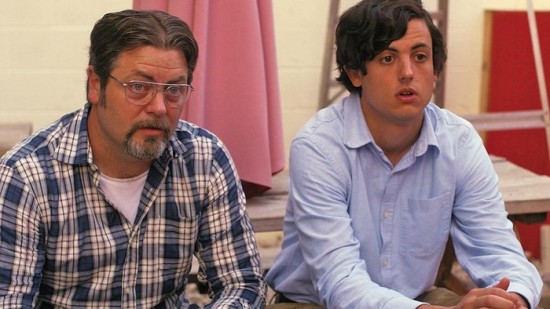 Somebody Up There Likes Me is a sneakily spectacular movie, like a Wes Anderson film you didn’t see coming but that also kinda blew you away.  I imagine, if I could go back and watch Rushmore again, I would feel similarly, like I had just seen something wacky/wonderful and wanted to tell people about it.  That’s a sign of something special if ever there was one, and that’s the sense this movie carries throughout, only building more & more uniquely & pleasantly as it goes along, never faltering in or apologizing for delivering a consistently bizarre reality.  Other than Offerman/Mullally, this team didn’t go on to do great things, but they did do one thing rather greatly, a little gem that we can go back and revisit any time we want, and for that I am genuinely thankful.

Max is an unmitigated loser, his life has been a disaster so far, and the passing of time isn’t likely to change that.  He got married at a young age; that ended badly.  He has a job at a steakhouse; that’s pretty stupid.  His only friend is a much older co-worker who also can’t do anything right; they might be made for each other.  And even though a cute girl named Lyla seems to understand Max’s personal brand of insanity, even that won’t stand the test of time; what does?  Life moves on from one tragedy to the next, always with just enough humor and hope to keep you reaching for the next adventure, even if every one up till now has been a complete failure.  But, almost despite yourself, you’re bound to meet people, make memories, and even change destinies along the way, whether or not you have any knowledge as to what the hell you’re doing.

I’m not saying that Bob Byington is Wes Anderson, and maybe it’s more a matter of borrowing heavily than making the same impact, but there are some definite early-Anderson vibes here, in the characters, their language, and the overall mood of the movie, just minus the color pink.  Even the music is somehow cute and heart-breaking at the same time, and there’s a little movement aid to bring us the new chapters of the story, and the actors bring that same forlorn energy; it’s reminiscent for sure.  But it’s also special on its own; the way Max never ages, the secret of the suitcase, the oddball comedy, Offerman’s patented style of gruff heart.  There’s a lot to like about Somebody Up There Likes Me, and the way that you don’t see it coming only adds to its impact.