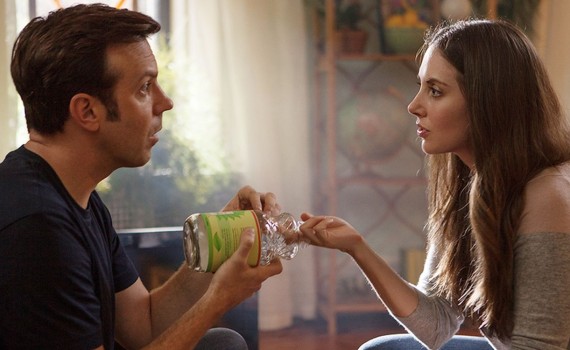 Let’s take a second to “get real” on the subject of rom-coms.  As bad as they are, we like them.  There, I said it, and I added you into this collective group, so feel free to admit it to yourself.  We like romantic comedies despite all their flaws, and it’s time we own that.  Why?  Probably because they’re romantic & comedic, which are two of our favorite things to see/read/watch/hear/absorb.  We like love and we like to laugh, so any genre that combines those elements is sure to win us over.  Now, we also can’t ignore that 90% of rom-coms are awful.  They are written with almost no realism, pander to our emotional insecurities, and blind us with pretty people talking about sex.  But we eat ’em up anyway because we’re forever searching for that one gem that will actually make us feel something, while not insulting our cinematic intelligence.  Well, look no further, that film is here, and it’s one of the best romantic comedies you will ever experience.

Jake & Lainey met in college and lost their virginity to each other.  A dozen years later, and having not seen one another since, they’ve both become serial cheaters, sex addicts, noncommittal partners, and generally bad people.  Jake can’t stay faithful to his girlfriends and would rather sleep with their sisters than go through the discomfort of breaking up with them.  Lainey can get any guy she wants, but can’t stop thinking about Matthew, the obsession of her life, the addiction of her desire, the last man she should be with, and the only man she wants.  When Jake & Lainey run into each other at group therapy, sparks fly and they make an effort to rekindle that fleeting night they once had.  But their respective issues will keep them from becoming lovers, and a friendship will grow out of a tangled mess of emotions that neither can unscramble alone. Sound familiar?  It’s basically the plot of When Harry Met Sally modernized to include masturbation, popping Ecstasy, and trying on lingerie.  Sleeping with Other People is a present day, adult, revamped take on that same old premise, that rom-com recipe that we’ve seen a thousand times before.  But the reason it works is the same reason its predecessors do, both the terrible moneymakers and the high-quality icons; it gives us what we want.  Like the genre duds, it’s about love conquering all odds, humor in the face of instability, friends becoming something more, New York City pumping life into every moment; all that cheesy garbage that we love but hate to admit.  But like the best of the best, it also delivers those extra pieces that are so often missing; heart, chemistry, brutal honesty, believability, and, above all, acting.

Sudeikis has literally never been better.  We saw a hint of it in We’re the Millers, that likeability that’s inherent to his talent, that natural humor that can’t be denied.  But he hones that here, creating a character that is uncomfortably honest, someone who’s funny off-the-cuff, throwing in pop references and subtle jabs like it’s nothing.  He needed a co-star though, someone to hit it off with, a compatible partner to keep the funny going, and Alison Brie stepped up.  She wasn’t perfect perhaps, but she was both idyllic & attainable, hot & sweet, the right choice for the role, and someone who played off of Sudeikis strongly.  And we can’t forget about Adam Scott, who played a sort of villain that you just don’t see in rom-coms, an evil darkness that  made you want to vomit.  And Lainey did at one point, after an encounter with Matthew, in a scene that exemplified the bitterness of this film, its deeper aspects that go to a place that we probably don’t want to visit.  Romantic?  Yes.  Comedic?  Hell yes.  But this film is also realistic in a way that the genre doesn’t usually represent, going down to rock bottom when others would simply have had Justin Timberlake look sad.  Drugs, sex, addictions, withdraws, tears, laughs, Weezer; this movie has it all.